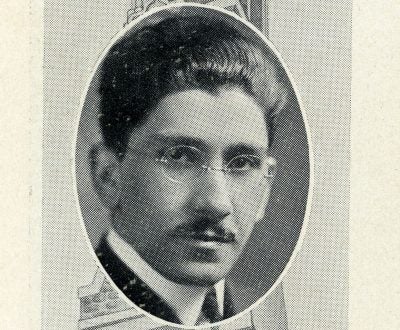 Sultan Mahmoud Amerie, of modern-day Iran, was the first international student to receive a scholarship from the School of Foreign Service. He attended American High School in Tehran, and following graduation entered into the service of the Ministry of Finance of Persia, later serving as an assistant to the Persian Relief Commission in Tehran.

In 1919, the Persian Government sent Amerie to the United States to study at Mount Pleasant Military Academy in Ossining, New York. He graduated from the Academy in 1920, next attending the College of Commerce at the University of California, Berkeley. After two years of study he came to Washington to work for the Imperial Legation of Persia, serving as the Honorary Commercial Attaché.

Arrival at the School of Foreign Service

While continuing his work at the Legation, in 1922 Amerie began his studies at the School of Foreign Service. It was this academic year that the SFS began awarding scholarships to foreign students, according to the General Catalogue of the University:

“To aid in cementing friendly relations between the United States and foreign countries, the School of Foreign Service has decided to offer certain scholarships to foreign governments, the designation of the recipient to be in the hands of the Diplomatic Representatives of the particular country.”

Amerie was the first recipient of such a scholarship, having been appointed to receive it by the Persian Minister to the United States, His Excellency Hussein Khan Alai.

He graduated with a Bachelor of Science in Foreign Service in 1924, and continued on to receive his MSFS degree in 1925. Later that year, the Hoya reported that he was working on his dissertation for a Doctorate in Philosophy, but it is unclear whether he ended up completing it.

The November 1925 edition of “The Annals” of the American Academy of Political and Social Science included an article written by Amerie entitled “The Three Major Commodities of Persia,” which he originally completed as part of his graduate work.

“Junior Prom will be Diplomatic Occasion”

In December 1925, Amerie was one of the distinguished guests at the first-ever Diplomatic Ball, hosted by the School of Foreign Service. As the Hoya reported at the time, this was the first time that any school had hosted a ball in honor of the Diplomatic Corps:

Amerie was included under the list of attendees published by the Hoya, which noted that these foreign diplomats and other guests were “prominent in Washington Social Circles.”

Continuing his career in international relations, Amerie served as the Iranian Trade Representative in New York City through the early 1940s. As State Department archives indicate, he played an instrumental role in trade negotiation discussions between the United States and Iran:

“[I]t was suggested that Mr. Amerie might be of some assistance in this connection with respect to possible commodities to be covered in negotiations, and the Minister offered to ask Mr. Amerie to come down to Washington at any time this might prove desirable.”

In a Memorandum of Conversation from January 1942, Cecil T. White of the Division of Commercial Policy and Agreements notes that Amerie was well-regarded for his knowledge and expertise:

“The Iranian Minister recalled that in reaching agreement with respect to a basis for trade-agreement negotiations two problems appear to present particular difficulty, namely, the Iranian exchange control and government monopolies. The Minister said that in view of Mr. Amerie’s long experience with Iranian domestic and foreign trade, he had brought him to the Department to clarify the Iranian position in those respects.”

Amerie was also active in dealing with the aftermath of Iran’s 1936 foreign exchange law, which prevented Iranians from holding foreign currency. On the American side, the issue with the law was that the Iranian government was failing to repay American firms for exports prior to the law’s enactment. In a 1941 letter to the Secretary of State, U.S. Minister to Iran Louis G. Dreyfus noted that about $50,000 (just over $800,000 in 2017 dollars) was still owed to American firms.

“Although it is not possible to say that no account has been paid through this procedure, the Legation knows of none; while it knows of many accounts which were owed to American exporters before the enactment of the Foreign Exchange Control Law of March 1, 1936, and which are still unpaid,” Dreyfus wrote.

Amerie served as a sort of liaison between the governments on the matter, also communicating with American firms. In 1941, W. F. Fischer, the export manager of Tuthill Spring Company, wrote to Wallace S. Murray, chief of the Division of Near Eastern Affairs, expressing his frustration but noting Amerie’s involvement in the matter:

“At this writing, we are still without funds covering commercial transactions realized in 1935… Although we had the active cooperation of the Iranian Trade Representative in New York City, Sultan Mahmoud Amerie, no results have been obtained.”

Few records of Amerie can be found in the time following 1943, perhaps related to the international tumult in the years to follow. Sometime in the 1950s, he and his wife Anita K. Amerie moved to the New Jersey suburb of Bernardsville, where they spent the rest of their lives. Anita passed away in October 1985, and Sultan Amerie passed away a few months later in December 1985. 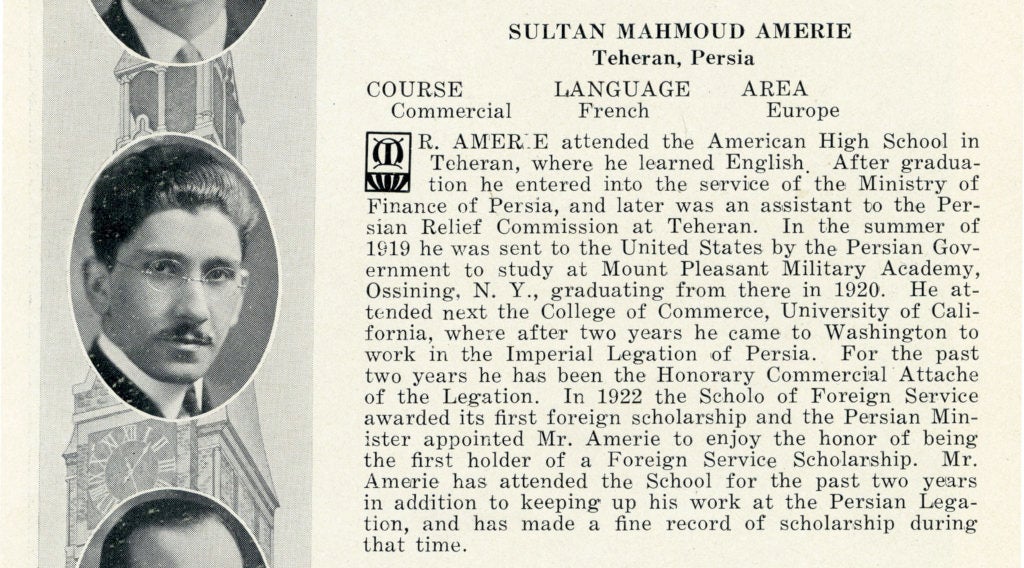