In 1919, the Walsh School of Foreign Service was founded as a direct response to the involvement of the United States in the First World War.

As the new dean, Fr. Walsh said the following in his dedicatory remarks:

“Having entered upon the stage of world politics and world commerce, we assume world-wide obligations. Our viewpoint can never be the same again.”

The establishment of a program at Georgetown dedicated to educating students on global issues and preparing them for lives of service in the international arena reflected both the University’s Jesuit heritage, with its emphasis on intercultural understanding, and its origins as an institution of the American Enlightenment, dedicated to the rights of man and the education of citizens.

Students completing one of eight majors for a BSFS undergraduate degree now study a core curriculum in international affairs, government, economics, history, theology, philosophy, and geography, with a language proficiency requirement. The SFS also hosts graduate students pursuing master’s degrees in eight different programs; this includes regional studies of many of the major regions of the world, and thematic programs in international relations, security studies and international development.

The SFS has become one of the world’s leading academic and research institutions, led by a faculty of both scholars and practitioners. SFS faculty are scholars in political science, economics, history, and cultural studies, as well as professionals with backgrounds in business, government, and the nonprofit sector.

Today, SFS alumni have gone on to become leaders in the public and private sectors and continue to embody the dedication to service in their various fields. Former U.S. President Bill Clinton (SFS’68) and Denis McDonough (MSFS’96), Chief of Staff to President Barack Obama, are among the many who have dedicated their lives to public service. King Felipe VI of Spain (MSFS’95), as well as Japanese Foreign Minister Taro Kono (SFS’85), have made their impacts on an international level. With over 75 U.S. Ambassadors over the last century like Ambassador Melissa F. Wells (SFS’56), former Ambassador to Cape Verde, Guinea-Bissau, Mozambique, Democratic Republic of the Congo (DRC) and Estonia, and Ambassador David Hale (SFS’83), Under Secretary for Political Affairs and former Ambassador to Pakistan, Lebanon, Jordan, SFS alumni have established remarkable legacies in the world of diplomacy and international affairs. In journalism, alumni such as Mark Landler (SFS’87) and Lourdes Garcia-Navarro (SFS’94) are constantly seeking the truth. From government and politics to humanitarian work, SFS alumni continue to embody the dedication to service all over the world.

SFS graduates excel in many different areas. From the public sector to public service, SFS alumni are leaders in many fields across the United States and internationally. 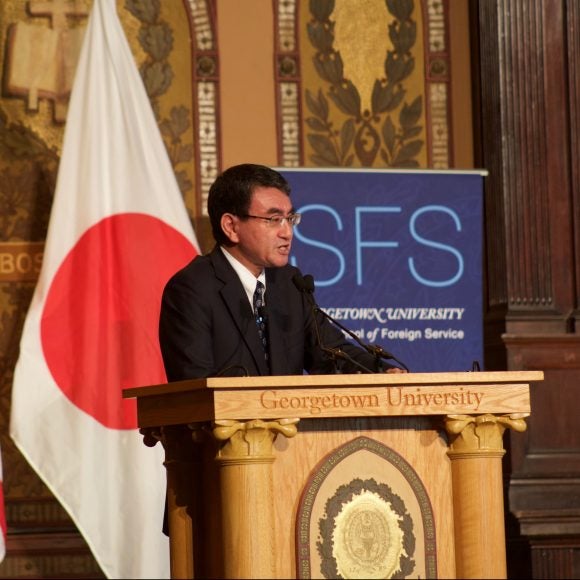