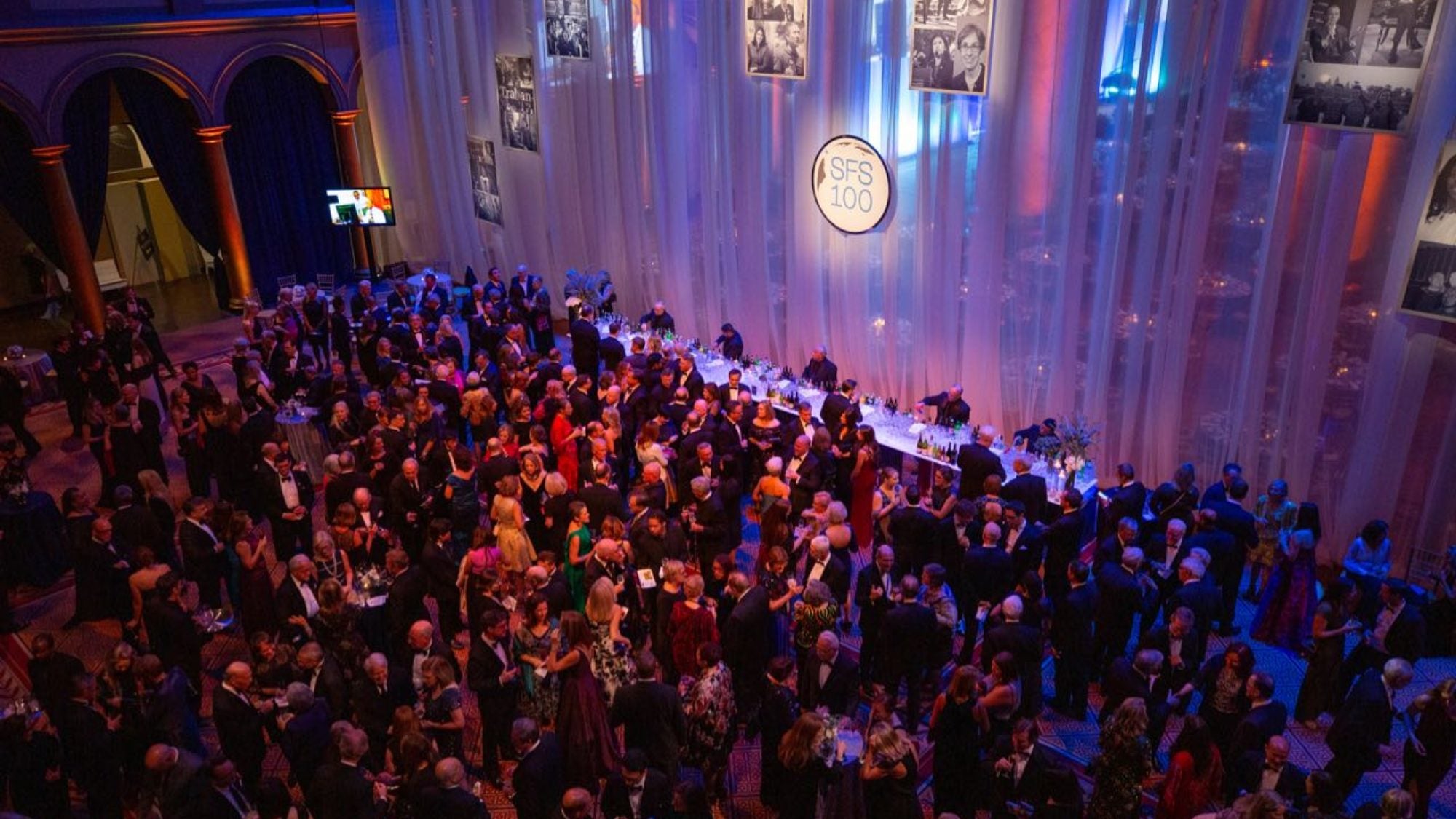 Title: SFS Reflects on 100 Years of Service with the Centennial Gala Weekend

The School of Foreign Service Centennial Gala Weekend brought together over a thousand alumni, students, parents, and friends for a celebration of the School’s first century through a series of panel discussions, lectures and performances. As the oldest international affairs school in the nation, SFS celebrated 100 years of service and commitment to the global community, and discussed the challenges of the next century of international affairs. Speaker of the U.S. House of Representatives Nancy Pelosi opened the day on Saturday by saying, “The School of Foreign Service has given the world generations of presidents, public servants, professional diplomats who have built a future worthy of the sacrifices of the men and women in uniform and the aspirations of our children.”

Friday began with World Bank Group President David Malpass delivering a Lloyd George Centennial Lecture on the Future of the Global Order: Greater Transparency for Broad-Based Growth. Malpass discussed how the World Bank is battling inequality, helping fragile states, and ensuring progress for all. “We’re not giving up on the idea that by breaking down barriers and giving everyone an opportunity to succeed, countries can build more open, safe, and prosperous societies,” he said. Following his speech, Malpass engaged in a conversation with SFS Dean Joel Hellman, a fifteen year veteran of the World Bank and its former Chief Economist.

As part of the Centennial Weekend, SFS brought together students and alumni for a series of career-related programming hosted by the SFS Graduate Career Center. Vikram Venkatram (SFS’21) attended the Centennial Networking Session. “What’s been really helpful for me is realizing how many options there are in terms of things I can pursue, and I feel like it’s a really good first step to know first what are all the opportunities out there so I can start making decisions later on,” he said.

Remember This: The Lesson of Jan Karski 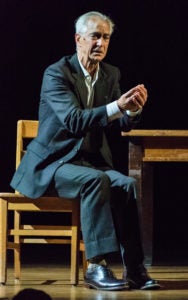 On Friday night, Oscar-nominated actor David Strathairn starred in the world premiere solo production of Remember This: The Lesson of Jan Karski, which details the extraordinary journey of the Polish WWII resistance member, Holocaust witness and beloved SFS professor Jan Karski. Co-written by Derek Goldman and Clark Young (COL’09) and produced by the Laboratory for Global Performance and Politics, the play asks probing questions about the individual duty to bear witness and act justly.

Following the performance, Strathairn sat down with former Georgetown President Father Leo O’Donovan, S.J., Ambassador Cynthia Schneider, Young and Goldman. The group discussed their personal connections to Karski and his intergenerational legacy. Many of Karski’s former students and colleagues were in the audience. “I consider part of my duty as a person in a performative venue to do that,” Strathairn said, describing his continued commitment to the role. “We are separated by immense gulfs of selfishness, distrust, fear, indifference. And with this has come so many who are displaced and turned away.”

Speaker Pelosi introduced Saturday’s festivities, which began with an opening plenary about the role of women in global affairs. Rep. Stephanie Murphy (MSFS’04), Karen Courington (MSFS’10), Her Royal Highness Princess Ghida Talal (SFS’86, MSFS’86) and Uzra Zeya (SFS’89) all shared their experiences as leaders in their spheres. Rep. Murphy talked about her decision to run for office, sparked by the 2016 nightclub shooting that took 49 lives in her community. “I just felt that if we are to have that brighter future that every American believes in, we have to change the kinds of people we send to Washington,” she said.

The day included 17 panels in total, ranging from discussions of Russia regaining prominence on the world stage, to the intersection of international justice and faith, to the role of science and technology in our evolving landscape. White House chiefs of staff, diplomats, faith leaders, journalists and many others all lent their professional experience to a broader, interdisciplinary discussion of the challenges facing the global community. Many panels featured Georgetown faculty and were organized by SFS programs, centers and institutes.

The afternoon concluded with a closing plenary featuring former U.S. Secretary of State and SFS professor Madeleine Albright, General George Casey, Jr. (SFS’70), 36th Chief of Staff of the U.S. Army and George Tenet (SFS’76), former Director of the CIA. They discussed the tools and strategies available to diplomats in the 21st century and how the responsibilities will evolve in the future. General Casey emphasized the need for courageous leadership and said, “As a leader, every time you make a decision you’re making a judgment about the future. And you could be wrong. And there could be significant consequences.”

The Centennial Gala on Saturday night welcomed distinguished guests such as President Bill Clinton (SFS’68), Secretary Albright, Yo-Yo Ma and His Majesty King Felipe VI of Spain (MSFS’95). The evening began with remarks from Georgetown University President John J. DeGioia and an invocation from Fr. O’Donovan, S.J. DeGioia reflected on the significance of the occasion, saying, “Our university has gathered to reflect on the history, mission and community that have shaped and sustained our School of Foreign Service.”

President DeGioia and SFS Dean Joel Hellman presented Centennial Honors to Judith Sherman (SFS’82), Chad Griffin (SFS’97), and Austin Tice (SFS’02, L’13), whose parents accepted the award on his behalf. Nominated by members of the SFS community, each of the three individuals have exemplified Georgetown’s Jesuit values over the course of their lives.

Tice left for Damascus, Syria, in 2012 before his final year of law school to pursue freelance journalism. During his work to report on the conflict and its effect on the daily lives of Syrians, Tice was abducted and, seven years later, his whereabouts remain unknown.

Sherman spent nearly three decades in Zimbabwe, Morocco, Guinea and Malawi battling HIV and AIDS in communities where up to 35% of pregnant women were afflicted. Since 1992, she has created programs focused on nutrition, reproductive health, treatment for women and human-rights based community service, even pioneering a UNICEF drone program to help with medical deliveries.

Griffin began his political career early, even before matriculation; at 19, he had already worked in President Clinton’s White House Press Office, making him the youngest ever West Wing staffer. He co-founded the American Foundation for Equal Rights, responsible for the federal court case challenging California’s Proposition 8, which led the way to the Supreme Court ruling in favor national marriage equality two years later. Griffin recently ended his time as president of the Human Rights Campaign, where his work included a host of LGBTQ+ advocacy initiatives.

After dinner, attendees were treated to a performance by Yo-Yo Ma and the Silkroad Ensemble, followed by a conversation with Ma, ensemble member Cristina Pato and the host of NPR’s Weekend Edition Sunday, Lulu Garcia-Navarro (SFS’94).

Beloved SFS professor Madeleine Albright was introduced by her teaching assistant Christian Allen (MSFS’20). She recalled her time as President Bill Clinton’s Secretary of State. “He was a leader who truly grasped the depth of American responsibility. As Secretary of State, this was an incredible asset—It was not hard for me to convince people overseas that the United States understood and cared about them.”

President Clinton delivered the Centennial Address discussing how the SFS values have shaped his political philosophy. At the core of his thinking, he said, is a commitment to our common humanity and a dedication to diplomatic ways of finding common ground.