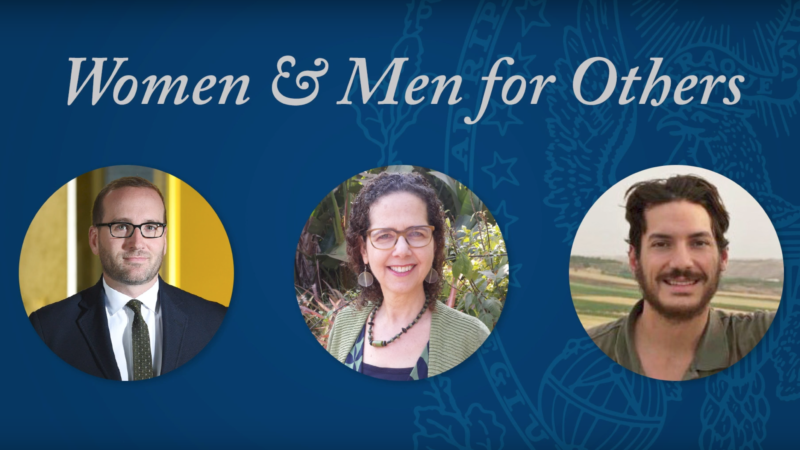 At the SFS Centennial Gala on Saturday, President John J. DeGioia and SFS Dean Joel Hellman presented Centennial Honors to Judith Sherman (SFS’82), Chad Griffin (SFS’97), and Austin Tice (SFS’02, L’13), whose parents accepted the award on his behalf. Nominated by members of the SFS community, each of the three individuals have exemplified Georgetown’s Jesuit values over the course of their lives.

Judith Sherman (SFS’82) left the United States in 1992 to work in Zimbabwe, researching ways to combat HIV and AIDS. Though she only intended to stay for two years, she spent nearly three decades in Zimbabwe, Morocco, Guinea, and Malawi, battling HIV and AIDS in communities where up to 35% of pregnant women were afflicted. She created programs focused on nutrition, reproductive health, treatment for women, and human-rights based community service. Sherman also pioneered a UNICEF drone program bringing medication to more remote and isolated communities and transporting laboratory samples for early infant diagnosis of HIV.

Chad Griffin (SFS’97) followed an uncommon path to the SFS; by the time he matriculated, he had already worked in President Clinton’s White House Press Office at the age of 19, making him the youngest West Wing staffer ever. Griffin is the co-founder of the American Foundation for Equal Rights, which orchestrated and led the federal court case challenging California’s Proposition 8, which set the stage for nationwide marriage equality just two years later. Griffin recently ended his 8-year tenure as president of the Human Rights Campaign, where he supported initiatives like the Equality Act, massive grassroots expansions, and new programs expanding protections for LGBTQ individuals.

Before starting his final year of law school at Georgetown, Austin Tice (SFS’02, L’13) headed to Damascus, Syria for the summer to pursue freelance journalism, his dream since high school. Tice reported on the daily lives of Syrians and the state of the ongoing conflict, filing reports in major media outlets. In August 2012, just before he planned to leave, Tice was abducted. His whereabouts remain uncertain to this day. Less than a month after his capture, Syrian demonstrators eloquently testified to Tice’s impact, holding aloft posters bearing his picture and calling for his release. “Freedom for Austin Tice,” one stated in Arabic, “who lighted Syria with his lens.”