On July 1, 2020, the Walsh School of Foreign Service and the Georgetown Alumni Association hosted legendary former SFS professor Charles Pirtle to share a retrospective on his Map of the Modern World course. The talk was part of the SFS Online & On Topic virtual event series.

Pirtle is largely credited with being the architect of the renowned SFS core requirement class. Pirtle’s course surveyed nearly a century of political geography and gave students a rigorous crash course in the historical, legal and geographical forces that shaped the modern map of the world from 1900 until 2005, when Pirtle retired.

The class was infamous within Georgetown for its difficult final exam, strict in-class rules and extensive curricular content. Indeed, Pirtle began his talk—which was attended by close to 400 alumni and guests—by quoting a write-up about the course that appeared in a section of Newsweek’s 2005 college edition titled “Classes for Masochists.”

“Doors are locked the minute class starts and student aides patrol the aisles to make sure no one eats, drinks or talks,” the segment read. “Pirtle’s class is mandatory but why do students flock to others like it? Sometimes it’s the challenge, sometimes it’s a legendary teacher and sometimes, apparently, the kids are just gluttons for punishment.”

Speaking to his former students in the audience, Pirtle addressed the question posed by Newsweek directly. “Many of you fell within that latter category, of being gluttons for punishment,” he said. “You would tell me that you failed the placement exam on purpose, just so that you could take the course! It became a rite of passage for all students in the School of Foreign Service.”

Pirtle explained that he designed the course alongside the SFS Curriculum Committee to remedy “geographical ignorance” among incoming first-year students. The course served as the fourth credit hour of the required class Empire and Independence in the Modern World, which was taught by the history department.

Each class period, Pirtle would lecture on the forces shaping the modern map of independent states and point out regions where borders were contested, the subject of conflict or which possessed unusual characteristics due to quirks of geography, history or law.

Pirtle’s classroom was notoriously strict. Each year, he relied on a group of teaching assistants to help “maintain peace and order” within the classroom.

The rationale behind his controlled classroom setting, Pirtle explained, was that even small interruptions could significantly derail the tight teaching schedule required for students to learn the sheer volume of course material offered in Map of the Modern World.

Just to pass the final exam, students had to know the locations of all independent countries, colonies, dependencies and territories, as well as be able to identify the predecessor states and states of origin of all new countries from 1900 onward. The course also tested students’ knowledge of the geographic and political histories of boundaries as well as ethnonationalist conflicts arising from boundary disputes.

Given the range of material covered in every class, tardiness was not acceptable in Pirtle’s classroom. He remembered, “I used to tell my students, ‘Every minute you’re late costs me a country!’”

Pirtle taught Map of the Modern World for nearly two decades. During that time, he had to adapt his course to accommodate the significant global changes wrought by some of the most momentous events in twentieth century history.

“At any point in time, the map represents all the decisions that have been made up until that date on how to partition the 29% of this world that is made up of land. And it is a constantly evolving map,” he explained. “I knew that going in 1986, but I had no idea what lay ahead of me!”

The professor taught students about political geography as the Soviet Union fell, Namibia and Eritrea declared independence and a bloody ethnic conflict raged in Kosovo.

The rapidly evolving nature of the geopolitical map was a key theme in the course, which examined independent states from 1900 until the present day.

Pirtle recalled what it was like to teach Map of the Modern World in the year following the fall of the Berlin Wall. “Nobody expected what was going to happen in 1990 and 1991. The Berlin Wall came down, but more importantly East and West Germany were united into a larger, new federal republic of Germany,” he said.

“It was a new world. I had grown up in the military, focusing on how to bomb Soviet bases with nuclear weapons. Now the Cold War was coming to an end and the world was changing. We lost one state. East Germany disappeared off the map,” he continued.

Throughout Map of the Modern World, Pirtle was tasked with rendering globally momentous events into lessons that could be understood by his students. And it is his students who remain at the center of how Pirtle remembers those historic moments today.

As he discussed the impact the end of the USSR had on geopolitics, Pirtle held up a piece of the Berlin Wall that had been gifted to him by a former student, Dr. Stephanie Anderson (SFS’89).

“This is my pride and joy,” he said. “My little hunk of the Berlin Wall.”

Pirtle recalls numerous “disasters” in the first few years of teaching the course. In order to accommodate the number of SFS students required to take Map of the Modern World, as well as the students from across Georgetown who voluntarily signed up for the class, Pirtle had to teach in back-to-back sessions.

Few lecture spaces at Georgetown were large enough to accommodate the class size, and lectures were held in multiple locations in any given semester. Pirtle remembered how he once arrived early to teach in a lecture theater in the medical school and showed up just in time to see a cadaver being wheeled off the stage! Eventually, he was able to convince Georgetown to set aside a dedicated classroom for his classes each year.

Nevertheless, the course soon became one of the most beloved in the SFS curriculum and Pirtle formed close bonds with the many students who took his class throughout the years. He remembered the tribute his students arranged for him upon his retirement.

“It was bittersweet. I’ll never forget the party that the students gave me in the ICC auditorium,” he says. “I still have all of the posters. They’re all framed on the stairway down to my study.”

Many of the students he mentored over the years joined the July 1 event to hear from their favorite professor once again. Maria Rojas (SFS’08) described Pirtle’s class as “one of the most amazing courses [at SFS]” in a tweet.

Geography professor Kevin Anchukaitis (SFS’98) also took to Twitter to express the impact the course had on him. “Enjoying the retrospective webinar on Map of the Modern world with the legendary Professor Charles Pirtle—such a formative class for this alumnus and geographer.”

One alumna was so inspired by Pirtle’s lecture during the event that she grabbed whatever she had to hand to take notes. She posted a picture of what she jotted down on a cereal box in crayon alongside a post describing Pirtle as a “legend.”

When asked by moderator Prof. Anthony Clark Arend whether he had any final words for his former students, Pirtle shared a message. “Keep on being what you have been. You make me proud of your accomplishments,” he told them. “It was a wonderful ride. I loved my years teaching Map and I love my students.”

He then said goodbye to his audience in multiple languages, before ending with a farewell: “Enjoy this wonderful world that we inhabit.” 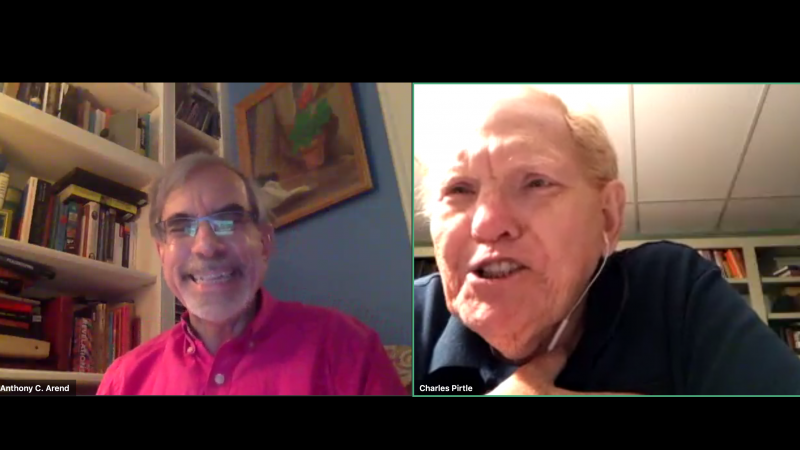