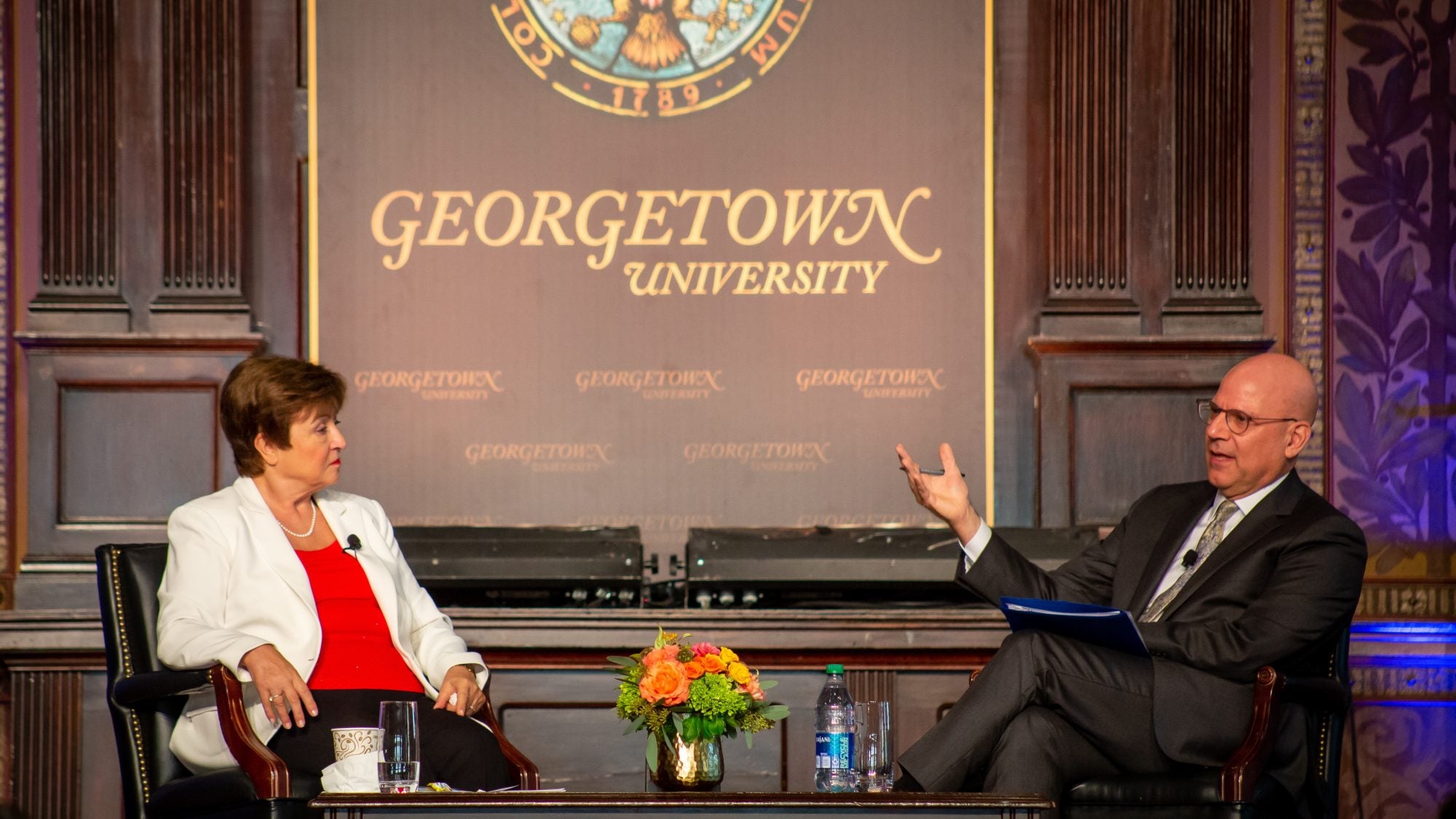 On October 6, 2022, IMF Managing Director Kristalina Georgieva joined SFS Dean Joel Hellman for a conversation focused on identifying policy priorities during a period of heightened global economic uncertainty. Hosted by Georgetown SFS, Georgieva’s remarks in Gaston Hall served as the opening curtain raiser speech for the World Bank and IMF’s annual meetings, a series of events bringing together finance ministers from close to 190 countries around the world.

President DeGioia introduced Georgieva, highlighting her vision for the role of the IMF as an institution committed to helping countries minimize financial risks and better cope with economic downturns — mechanisms that would ultimately “promote greater shared prosperity around the world.”

Georgieva opened her speech with an overview of the world’s economic outlook over the past three years. Among other challenges, she mentioned the role of COVID-19, Russia’s invasion of Ukraine and climate change in causing major shocks to the global economy.

“These shocks have inflicted immeasurable harm on people’s lives,” she said. “Their combined impact is driving a global surge in prices, especially on food and energy, causing a cost-of-living crisis.”

Compounding this issue, Georgieva explained, is a major ongoing shift in the world economy. “We are [moving]…from a world of relative predictability — with a rules based framework for international economic cooperation, low interest rates, and low inflation — to a world with more fragility,” she stated. “A world in which any country can be thrown off-course more easily and more often.”

First, she proposed that countries “stay the course to bring down inflation.” Georgieva urged central banks to act decisively, yet remain flexible in order to adapt to an unstable economic environment. She warned that “not tightening [monetary policy] enough would cause inflation to become de-anchored and entrenched…On the other hand, “tightening monetary policy too much and too fast…could push many economies into prolonged recession.”

Georgieva’s second recommendation advocated for the use of fiscal measures directly targeted toward lower-income households — a policy focused on avoiding a broad-based rise in demand that could lead to a greater spike in inflation.

Finally, she emphasized the need for increased global cooperation to prevent crises from becoming entrenched in developing economies. “Over 60 percent of low-income countries are in — or at high risk of — debt distress,” she said. “To reduce the risk of debt crises, large creditors such as China and the private sector have a responsibility to act.”

To end her remarks, Georgieva highlighted new measures from the IMF that could be used to help countries alleviate economic downturns — some of which included the emergency financing ‘food shock window’ and the IMF’s Resilience and Sustainability Trust, the fund’s first long-term lending tool.

A World Working Together

Georgieva then sat down for a conversation moderated by Dean Hellman, where the two touched on issues ranging from the knock-on effects of a prolonged stalemate in Ukraine, to the need for countries to collaborate to avert economic spillovers.

Hellman asked Georgieva to describe the preventative resources available to emerging markets. In response, Georgieva emphasized how the IMF itself is stepping up to support developing economies in times of crisis — and that a sizable portion of the fund’s lending supply has yet to be utilized.

“The IMF has the capacity to lend that is $1 trillion,” she stated. “You heard the numbers, we are under $300 billion of [the total] deployment of this capacity. So, we have [the] resources to come to the rescue of [these] countries. And so do development banks.”

Following their discussion, Dean Hellman opened up the event to student questions. One student asked how the IMF ensures that their lending policies result in real growth in developing countries, rather than adding to their debt.

In her reply, Georgieva explained that the IMF often tries to minimize the amount they lend to countries, focusing instead on providing support through grants. This said, she underscored the value that IMF loans provide in their ability to signal to other creditors that it’s safe to lend to a country in crisis.

“We are a lender of last resort. In other words, countries cannot borrow from anybody else,” she stressed. “In other words, the risks are much higher than they would be for a country that can access private capital. And this is something that sometimes the public undervalues, that when we take more risk, of course it may not work. The political will may disappear, our program may not be anchored well…[But] our job is to be there and to bring others to create this anchor of trust for the country.”