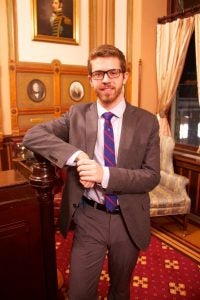 Garrett Hinck (SFS’18) and the Science, Technology and International Affairs (STIA) major are a perfect match. Hinck’s four years at Georgetown have been characterized by academic and professional experiences at the intersection of all three aspects of the major.

The son of two biochemists, Hinck  always thought that he would grow up to be a scientist. He came to D.C. with an interest in public policy and STIA allowed him to pursue both science and policy simultaneously.

At this moment in time, I can’t imagine any other major that gives me the chance to study what I think are the most important issues confronting our country: cybersecurity, data, privacy, and the power of technology to change international affairs.

As the culmination of his STIA degree, Hinck conducted research on human rights norms and regulation of cyber-surveillance software tools for his senior thesis. “It was a challenging, eye-opening research project into a fascinating technology policy issue.”

Ultimately, Hinck hopes to be a lawyer in the federal government working on international affairs and technology policy. For now, he will spend a year at the Carnegie Endowment for International Peace, where he will complete a year-long fellowship as a research assistant working on cyber and nuclear policy.

Exploring STIA, Inside and Outside of the Classroom

For Hinck, the classes he took in STIA were key to preparing him for future internships and careers. He says Professor Anthony Arend’s International Law and War class led him to develop his interest in law and national security, which he later applied to an internship at the Brookings Institution with Lawfare, a digital publication dedicated to issues at the intersection of law and national security.

Governance and Liberty in the Digital Age with Professor Prem Trivedi provided an in-depth look at the challenges of regulating social media, the Internet, and surveillance in the United States. This connection between cybersecurity, policy, and the law fueled his job as a research assistant with Georgetown Law’s Center on Privacy and Technology. In addition, for the past two years, he’s led a team of Georgetown students  participating in the Cyber 9/12 student challenge, a global cyber policy competition sponsored by the Atlantic Council that poses a fictional cyber catastrophe for students to solve with national security policy recommendations. Lastly, Hinck interned at the National Consortium for the Study of Terrorism and Verisign, both of which introduced him to the field in the context of research and private sector policy applications.

And yet, Hinck’s favorite class is not in the realm of public policy nor international affairs. The History of Science and Religion in the West, taught by Father David Collins, explored 16th century writing about religion in the context of modern scientific discovery. Hinck appreciated Fr. Collins’ approach to presenting complex, ancient texts and guiding the class through understanding them. “The course showed me where the unions and tensions between modern science and religion came from and how they changed over time.”

“I’ll Miss the Spontaneity” of Being in D.C.

This spring, Hinck took former Secretary of State Madeleine Albright’s course America’s National Security Toolbox, which he says was a fantastic capstone from one of the country’s foremost diplomats. Hinck says he’ll miss the spontaneity of being in D.C. at the SFS the most. “This place has so much to offer that it can become unremarkable to go from your class with the former Secretary of State to go do research on letters from the 1700s in the rare book collection.”

There’s not anywhere else where you drop everything in your afternoon to go see a Supreme Court justice speak or run into your professor at the Tombs.

Just as spontaneous and memorable was the legendary snowball fight that broke out just after a massive snowstorm hit D.C. two years ago. Hinck, who grew up in Texas with a pronounced lack of snow, says the event was a favorite memory from his time at Georgetown. “Someone next to me got hit with a rogue snowball and the next thing I knew about a hundred people were pelting each other with snow. It was amazing.”

Getting Advice (and Giving Some Too)

Along the way, Hinck credits his Georgetown professors for invaluable mentorship and advice. He says the class Cybersecurity: Policy, Technology, and Operations taught by Professor Sam Visner, Adjunct Professor in STIA, crystallized his interest in cybersecurity policy. “He was a really great coach for our team for the Cyber 9/12 challenge and a great advisor on my career.” Professor Alex Thurston provided another source of mentorship, “He really encouraged me to pursue my passions for policy research and to keep on the path towards working in the policy world.”

If Hinck could give some advice to incoming Georgetown freshmen, it would be to make mistakes. “Be bolder and don’t be afraid to push yourself to do things that are uncomfortable. Four years is up so much sooner than you think. The mistakes that you make are the most valuable thing that you’ll learn, so make a lot.”

He also encourages Georgetown students to take advantage of the Office of Fellowships – ”They offer help with advising and application and can point you towards some great opportunities.” For him, the Office was instrumental in securing his own fellowship at the Carnegie Endowment post-graduation.

Admittedly, the number of classes, clubs, jobs, and events on campus can get overwhelming. Yet, Hinck says it allowed him to focus on what interested him most.

That variety challenged me to figure out what really mattered to me and how I could best use my time. It’s taken four years but I’m really happy with how it turned out.