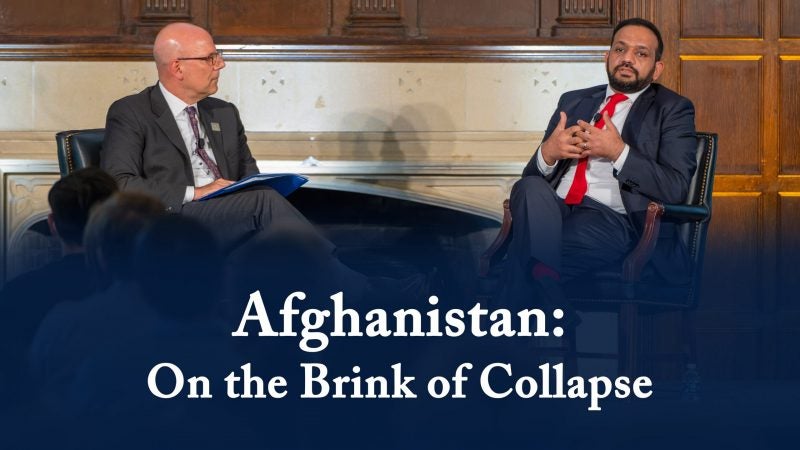 On September 1, 2021, The Walsh School of Foreign Service (SFS) hosted Khalid Payenda for his first public remarks since resigning as Afghanistan’s minister of finance. In a conversation with SFS Dean Joel Hellman, Payenda discussed how the Taliban took over the country, the corruption that hollowed out its U.S.-supported government and what Afghanistan’s economic future might hold.

Payenda tendered his resignation on August 10, mere days before the Taliban took over Kabul. The militant organization swept through the country far faster than many U.S. government officials and security analysts had predicted, leading to a hasty U.S. and coalition evacuation of an estimated 123,000 people ahead of the military’s scheduled withdrawal from Afghanistan.

“The speed of the collapse shocked almost everyone,” Payenda said at the event. He had believed Ashraf Ghani’s administration was unsustainable without major reform over the long term but that the government could resist the Taliban for another two to three years. Even within the cabinet, Payenda claimed, nobody predicted the rapidity with which the administration fell.

Though a Ministry of Finance spokesperson said Payenda left his position in part due to the “deteriorating security situation” in Afghanistan, the former minister cited interpersonal tensions with President Ghani as the reason for his resignation. “I thought that support [from the president] in the last few days was withdrawn. I think the war had a toll on his psyche, and he looked at everything with suspicion,” he said. “His style was something that inhibited open discussions…He had a limited number of people who would come to him with frank feedback, because [people] were afraid of his temper.”

According to Payenda, multiple high-ranking public servants had resigned in recent months for similar reasons. “I think the trust was not there anymore,” he continued. “I was not the right person for the job, and maybe there were expectations I could not fulfill.”

Payenda detailed the chaotic final weeks of the government and claimed that the cabinet — including Afghanistan’s two vice presidents — was not given advance notice of Ghani’s departure, describing a WhatsApp group in which senior government officials expressed their frustrations at the president’s quick exit.

Payenda put much of the failure of the Ghani administration down to rampant corruption in both Afghanistan’s public and private sectors.

“The scale of corruption was huge,” Payenda said, asserting that bribes and closed-door agreements were prevalent throughout the government and its partner institutions, including in the president’s office.

He described numerous instances in which government officials, private contractors and leaders of state-owned enterprises such as the Afghan Public Protection Force (APPF) paid for job appointments. In some cases, he said, $1 million bribes were passed to members of parliament to gain influence and control over customs revenue.

Corruption, he claimed, was also fueled by international development organizations, such as the World Bank and USAID, which he said funneled the majority of their funding toward contractors with little oversight from the Afghan government or its allies. “We did not have any control over them or any input or visibility to check and verify if money was paid [into development projects].”

Payenda expressed his concern for an Afghan economy that is heavily reliant on international donors and which is now in the hands of the Taliban. The withdrawal of financial aid from the United States and financial institutions such as the World Bank would be devastating, he stressed.

He remained unconvinced that financing from powers such as China, Russia, Pakistan and Iran would be able to plug the gap. “Nobody is going to have the depth of that [U.S.] purse,” he said. “[China] would come but [only] for resources, unfortunately…I don’t see China stepping in to help.”

Payenda called on the U.S. to negotiate with the Taliban, using humanitarian aid and regional relationships to put pressure on the group to include more actors in a coalition government. “The U.S. has unfortunately done a lot of damage to its reputation,” he said, “but I believe it has some leverage, on [Afghanistan’s] neighbors and particularly on Pakistan, to ensure a coalition government.”

Payenda and Hellman’s conversation was open for in-person attendance by ticket-holding members of the Georgetown community, and more than 200 viewers watched the event’s Facebook livestream. In the final section of the event, Payenda took questions from both sets of attendees.

“I know how ugly war can get,” Tina Dolbaia (MAERES’21), a graduate student from Tbilisi, Georgia, told the guest speaker. “What [will happen to the Afghans] left behind?”

Payenda was not optimistic about the outlook for Afghan civilians, especially women. He said that the leniency the Taliban has exhibited in Western media interviews was not consistent with the reality on the ground. “What they say and they do, I’m not sure it’s the same.”

One of the last questions the former minister answered related to his future career and whether he would return to government service in Afghanistan.

Payenda ruled out working with any Taliban government that did not improve its record on human and, especially, women’s rights. “They think women are inferior, and I learned so many things from my brilliant female colleagues. They have approached me for advice but I said I don’t recognize [them] as a government, as of now.”

He continued, “All indications are, if anything, [the Taliban] are more brutal than they were twenty years ago.”