Title: “Exactly Where I’m Meant to Be”: Ashanee Kottage (SFS’22) Tells Stories through Science and Performance 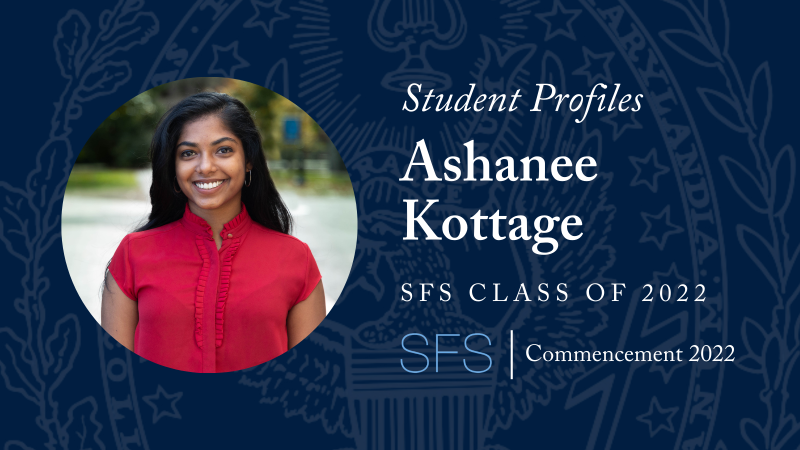 Ashanee Kottage (SFS’22) describes herself as a storyteller, a scientist and an activist. The Science, Technology and International Affairs (STIA) major and Sri Lankan international student has been part of a host of inspiring and thought-provoking performances during her time at SFS — both as an audience member and a performer.

Kottage recalls attending a panel event early in her Georgetown time at Georgetown that featured the former NATO supreme allied commander. Sitting in the front row gave her the chance to shake the speakers’ hands, ask questions and savor the moment. “It was so surreal to me,” she says. “That was one of those moments, so early at my Georgetown career and so early at my time on the Hilltop where I really felt like this is exactly where I’m meant to be.”

Since then, Kottage has taken advantage of more opportunities to expand her horizons and make the most of what Georgetown has to offer. By pursuing a minor in Theater and Performance Studies and collaborating with the Department of Performing Arts, Kottage has found new avenues to share her passion for science and international politics. She cites performing in “On the Lawn,” a production about the history of the American lawn, as an especially formative experience. “It has inspired me to pursue a life at the intersection of science, environmental activism and performance,” Kottage says.