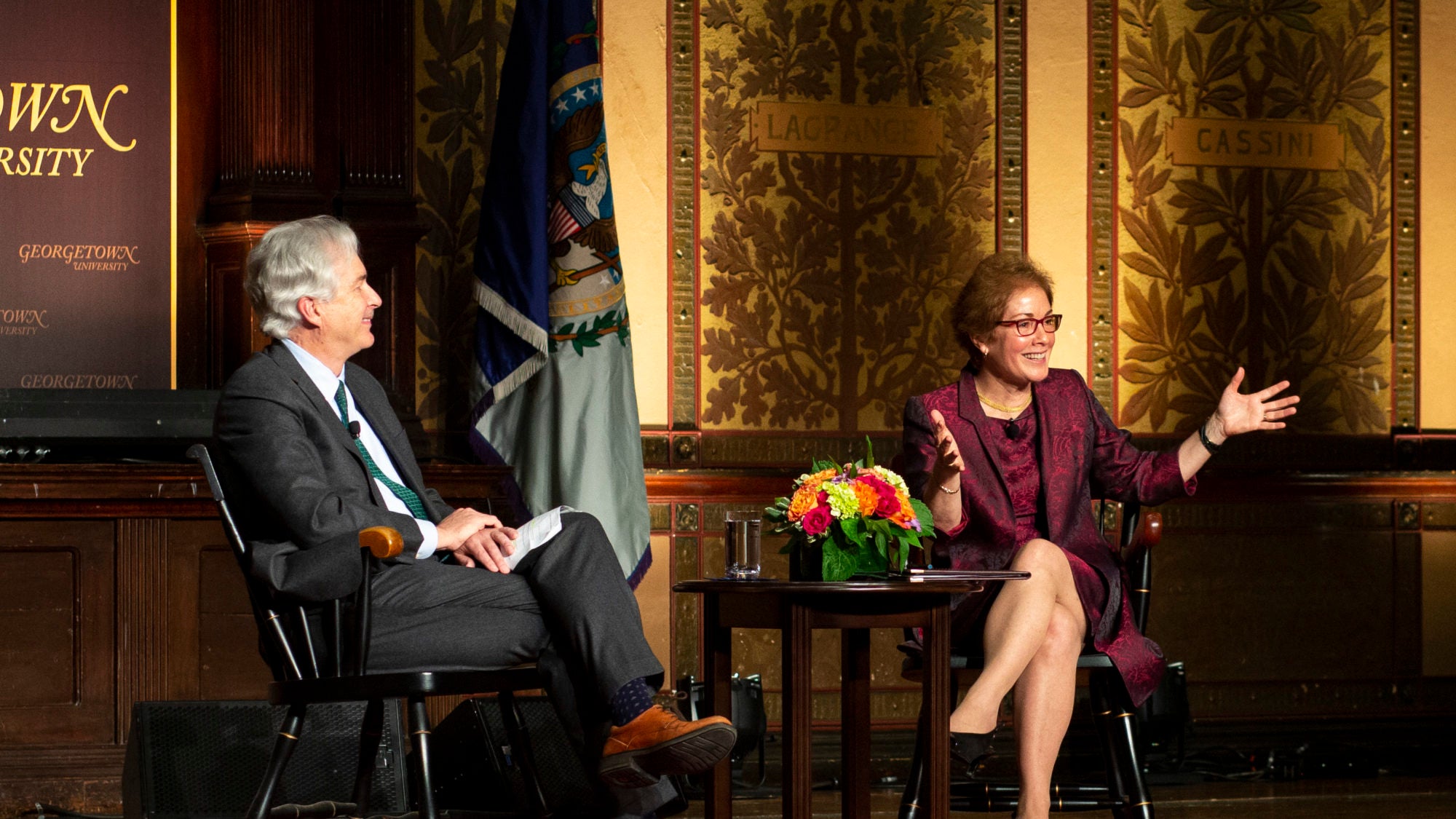 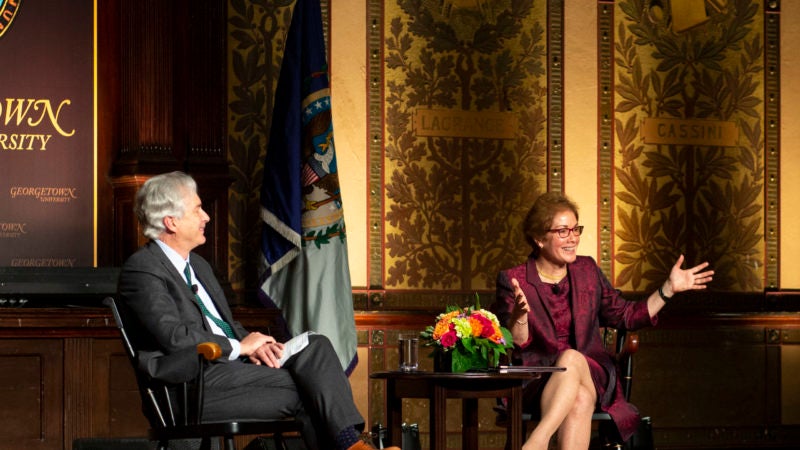 Ambassador Marie Yovanovitch, who served as U.S. ambassador to Ukraine, Armenia, and the Kyrgyz Republic during the course of her 33-year career in the U.S. Foreign Service, received an award this week from Georgetown’s Institute for the Study of Diplomacy (ISD).

Named for a beloved SFS registrar, the J. Raymond “Jit” Trainor Award for Excellence in the Conduct of Diplomacy is presented annually to an individual who demonstrates distinction in the field of diplomacy. Previous recipients of the Trainor Award include former U.S. Secretary of State and Georgetown professor Madeleine K. Albright, former president of Mexico Ernesto Zedillo, and former UN Secretary-General Kofi Annan.

At the event, hosted on Feb. 12 by ISD and Georgetown’s Institute of Politics and Public Service, Yovanovitch argued that the United States should reinforce diplomatic missions overseas by strengthening American citizens’ understanding of U.S. foreign policy.

“We need to build a constituency among Americans,” she said in a lecture on today’s diplomacy. “Over the last few months, I have received hundreds of letters, from all over the United States, from individuals thanking me for explaining what diplomats do. Clearly, we need to do a far better job at communicating our story.”

She noted the enduring importance of international institutions and said they “need a reboot–what they don’t need is the boot.”

Yovanovitch acknowledged the global challenges, such as climate change, terrorism, pandemics, and disinformation, facing today’s diplomats, but said that interacting with students at SFS gives her hope for the future of international affairs.

“They are not giving up. They are committed to a career in public service,” she said. “How can we be anything but optimistic in the face of their inspiring example?”

ISD Director Amb. Barbara Bodine, chair of the board of trustees for the Trainor Endowment Frank J. Hogan, dean of the Walsh School of Foreign Service (SFS) Joel Hellman and ISD board chair and Career Ambassador Thomas Pickering all gave remarks at the event.

Hellman noted Yovanovitch’s dedication to public service and courage in the course of her career.

“Though [Yovanovitch] did not seek the role, she has become the face of the very ethos of public service,” he said.

Amb. William Burns, a former U.S. Deputy Secretary of State and President of the Carnegie Endowment for International Peace, joined Yovanovitch on stage for a discussion after her address.

He questioned Yovanovitch about what she thought the United States had gotten right and wrong in its policy towards post-Soviet Europe over the past few decades.

“I think we got a lot right,” she replied. “I think that the message of America, of freedom, democracy and prosperity is a hugely powerful message that resonates not just with Americans, but all over the world…but there needs to be more follow-through than there has been.”

“I think that the Ukranians are very interested in a strong and solid relationship with the United States,” she said. “Our support is Ukraine’s greatest strategic advantage, and the Ukranians know that.”