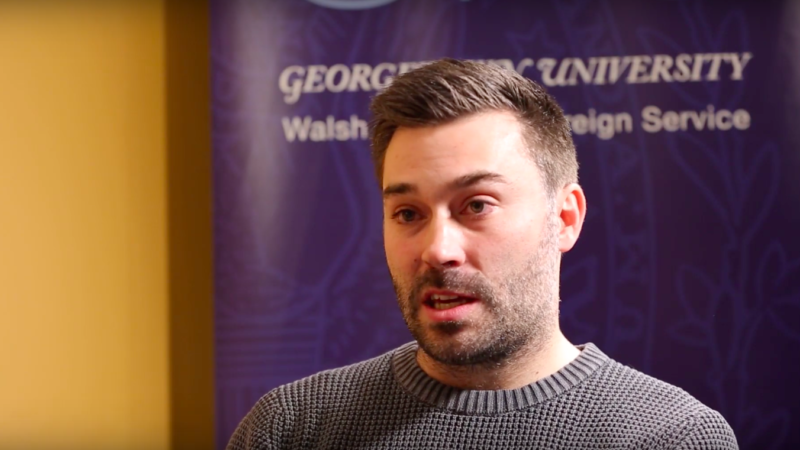 Trae Stephens (SFS’06): “We should be teaching people how technology is going to impact their job”

Trae Stephens (SFS’06) is a partner at Founders Fund, a venture capital firm in San Francisco.

He was interested in working in national security and wanted to learn Arabic, so Georgetown was a “natural choice.” Recalling late nights in his dorm discussing foreign policy, Stephens valued going to a school with “like-minded people” who cared about issues impacting the world.

Stephens started his career in the intelligence community, which he described as a “formative” experience that helped him learn what he liked and disliked in a career. He thinks that seniors are often too focused on landing the “perfect” job once they graduate. “I think that’s just the wrong way to think about it,” he said. “We should be preparing students to understand that this is an iterative process.”

Trae Stephens is a Partner at Founders Fund, where he invests across sectors with a particular interest in startups operating in the government space. He is also Co-founder and Executive Chairman of Anduril Industries, a defense technology company focused on autonomous systems.

Previously, Trae was an early employee at Palantir Technologies, where he led teams focused on growth in the intelligence/defense space as well as international expansion, helping large organizations solve their hardest data analysis problems. He was also an integral part of the product team, leading the design and strategy for new product offerings. While at Palantir, Trae also served as an adjunct faculty member at Georgetown University.

Prior to Palantir, Trae worked as a computational linguist building enterprise solutions to Arabic/Persian name matching and data enrichment within the United States Intelligence community. He began his career working in the office of then Congressman Rob Portman and in the Political Affairs Office at the Embassy of Afghanistan in Washington, D.C. immediately following the installation of Hamid Karzai’s transitional government. Trae graduated from the School of Foreign Service at Georgetown University.