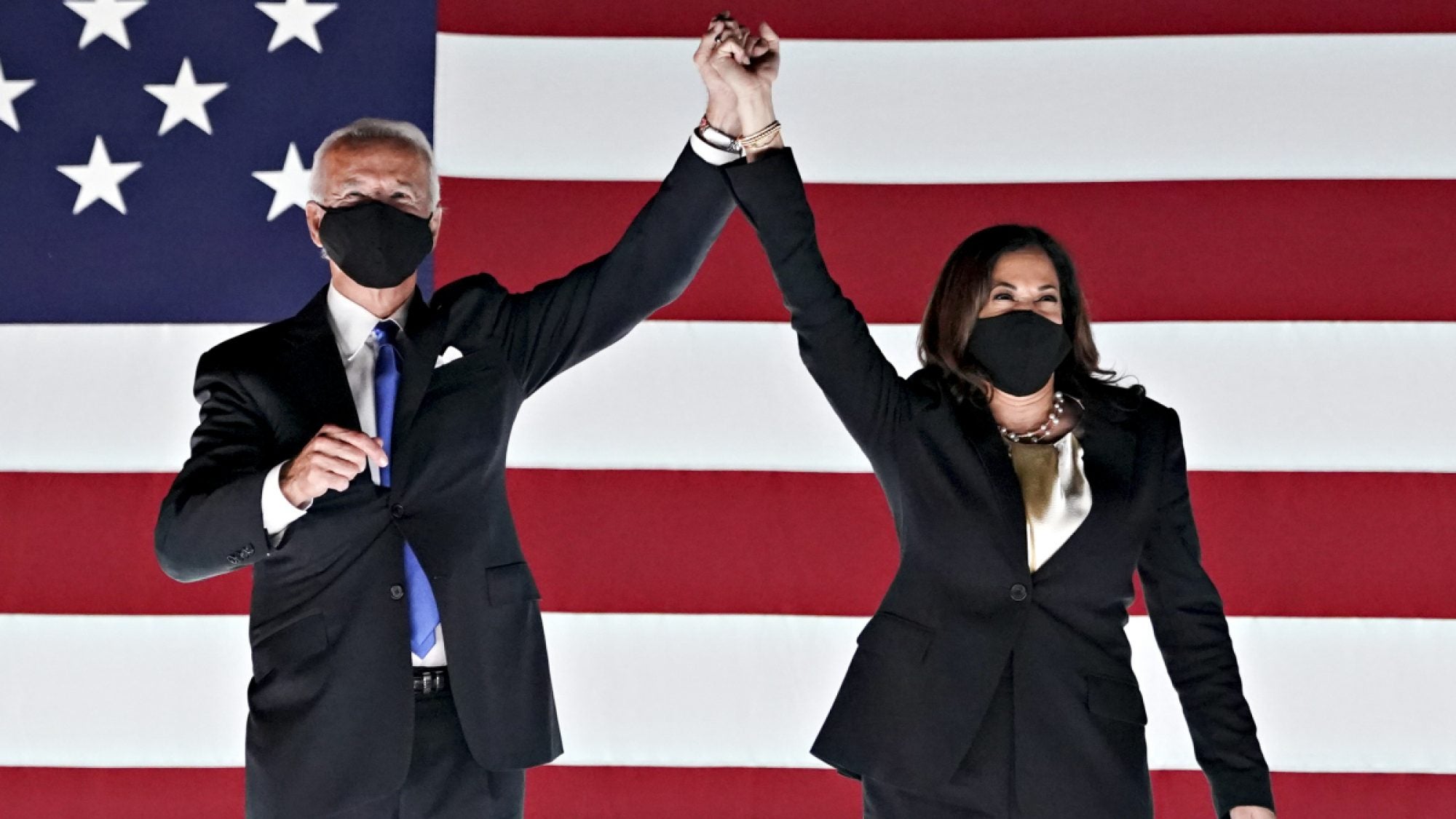 Many questions remain unanswered in the aftermath of the Presidential election on November 3, 2020. Though Joe Biden was named President-elect on November 7 after a tense wait for results, incumbent President Donald Trump and his supporters continue to contest the victory. As in 2016, polls failed to correctly predict how many key voting groups would cast their ballots and serious challenges like the COVID-19 pandemic and fractious international relationships still loom large.

In op-eds and interviews, SFS professors helped provide clarity and context for this moment in history and explained the implications of the new Biden administration on the world stage. The faculty analysis helps to make sense of the possible post-election scenarios at home and overseas, why some Americans voted the way they did and how the President-elect might meet pressing issues, from Russian political influence and tensions in the Middle East to a post-Brexit trade deal and the fallout from a global pandemic.

In Business Insider, Adjunct Professor Amb. Cynthia Schneider gave an account of the Trump administration’s pivot away from international institutions and foreign partnerships, which she says harmed America’s influence abroad and legitimacy as a global actor. “Trump has squandered the United States’ greatest asset: our power of attraction as a land of opportunity, justice, plurality and individual freedoms,” she writes. In the Biden administration, Schneider predicts a distinctly different approach, saying that she is hopeful of a more stable foreign policy approach that repairs the United States’ international image.

Prof. Angela Stent, Director of the Center for Eurasian, Russian & East European Studies, makes a similar case in The Economist, saying that Biden is likely to be an antithesis to Trump, especially with regard to what she believes will be his “harder line on human rights and a tougher stance on Russian political interference.” Even while challenging other nations on these issues, Biden will seek to restore diplomatic dialogue, she writes, which will be essential to his foreign policy goals of rejoining the Paris Climate Agreement, extending the New START nuclear treaty with Russia and more.

The upcoming change in American leadership will have significant implications for key international trade relationships, including with the United Kingdom. Unlike Trump, Biden has voiced his misgivings about the UK’s exit from the European Union. Nevertheless, Charles Kupchan, Professor of International Affairs, told The Telegraph that Biden is pragmatic enough to seek stronger relations with the country, no matter his views on the issue. However, past statements show that he will not compromise on the question of Northern Ireland and the Good Friday Agreement, an issue that will have major implications for any eventual trade agreement between the U.S. and a post-Brexit UK.

One oncoming challenge for Biden will be deciding what to do with Trump’s tariffs on China and focusing on the important issue of intellectual property, Marc Busch, the Karl F. Landegger Professor of International Business Diplomacy, writes in The Hill. A bilateral investment treaty to help solve the problem of “forced-technology transfer,” he argues, would allow investors to argue their case before a neutral body and seek compensation for intellectual property rights infringement. Busch also argues for Biden to push for access for American companies to the results of state-subsidized research and development in China. Boosting economic competitiveness in ways that the ongoing trade war does not, he writes, should be a priority for the Biden administration.

With regard to wider China policy, part of Biden’s strategy will be contingent upon the final moves of the Trump administration, Prof. Evan Medeiros, Penner Family Chair in Asian Studies, says in the The Wall Street Journal. He warns that Trump may seek to cement a legacy that makes things more difficult for Biden when he takes office next January.

With the public health and economic fallout of the pandemic consuming the administration on the domestic front, Biden will look to deescalate foreign policy challenges, especially in the Middle East, says Adjunct Assistant Professor Karim Sadjadpour in an interview with CSIS’s Michael Young. Overall, Sadjadpour believes that Biden’s policy in the region will emphasize “restoring America’s global leadership and its relationship with U.S. allies and partners.” He argues that the new administration will likely take a pragmatic approach toward Iran, favoring direct dialogue with Tehran while remaining firm on key issues such as nuclear weapons development and human rights abuses. In Syria, Sadjadpour believes that the Biden administration would seek to reassert U.S. interests to defend U.S. allies, such as the Kurds, and to alleviate the refugee crisis.

Relationships elsewhere in the region could undergo a realignment as well, said Prof. Daniel Byman in an interview he did with NPR. Over the past four years, Trump has been on good terms with Saudi Arabia, in spite of documented human rights abuses and the killing of Jamal Khashoggi. “The president around the world has shown favoritism for dictators,” Byman says. A new administration would likely bring some symbolic punishments — cuts to arms sales, for instance — he predicts, but Saudi Arabia’s importance in the Middle East will still require a working partnership. “The Biden administration is going to want a good relationship with Saudi Arabia despite the many problems,” Byman says.

Challenges Overseas and at Home

Pressing domestic issues will also require the new administration to contend with international affairs, not least when confronting the global coronavirus pandemic. In this area, Biden’s transition team has already recruited top Georgetown experts, including Science, Technology and International Affairs Professor Rebecca Katz, who was named to the President-elect’s new coronavirus task force. In the lead-up to the election, Katz was part of the team of health and medical professionals advising Biden. An expert on the World Health Organization and international health regulations, and former consultant to the Department of State, Katz will bring expertise in large-scale public health planning and government affairs to her role.

The President-elect has turned to SFS expertise elsewhere, naming a number of SFS faculty and fellows to his agency review teams, which analyze government agencies for the Biden-Harris transition team to ensure that the new administration can begin work on key issues from day one. Jeremy Konyndyk (MSFS’03), an Adjunct Instructor for the Global Human Development program, was named to Biden’s Department of Health and Human Services agency review team. Amb. Linda Thomas-Greenfield, Non-Resident Fellow at the Institute for the Study of Diplomacy (ISD), will serve as the lead on Biden’s Department of State agency review team, while Amb. Bonnie Jenkins, Adjunct Professor, and Amb. Nancy McEldowney, Non-Resident Fellow at ISD will share their expertise as part of the team. Amb. Jeff DeLaurentis (SFS’76), Distinguished Resident Fellow in Latin American Studies at ISD, will serve on the United States Mission to the United Nations agency review team.

In the aftermath of the pandemic, the Biden administration will have to focus on rebuilding a damaged economy. One area that could be key to economic recovery is the growth of the global artificial intelligence industry. In a piece for Fortune magazine, Will Hunt, Research Analyst at Georgetown’s Center for Security and Emerging Technology (CSET), argues — counter to many of Silicon Valley’s heavyweights — that greater regulation of A.I. under Biden could speed up the technology’s progress. Using aviation as a case study, Hunt explains how regulation can remove the burden of developing safety benchmarks from scratch for entrepreneurs and, in turn, encourage big companies to invest in A.I. models. For this reason, Hunt calls on industry leaders to “worry less about new regulations slowing down progress” under a Biden administration and focus their efforts on “developing the smart regulations required to speed it up.”

In an election where many voting blocs confounded pollster’s expectations, media outlets also turned to SFS scholars to help them make sense of a phenomenon much closer to home: the American electorate’s voting patterns. While white evangelical Christians voted overwhelmingly for Trump, as anticipated, SFS professors helped to broaden the analysis of why they did so beyond the prevailing perception that it was due to the incumbent’s stance on abortion.

In a piece in The Conversation exploring this community’s continuing affinity for Trump’s politics, Dr. Josh Roose draws on research by Prof. Jacques Berlinerblau, Rabbi Harold White Chair in Jewish Civilization, to show that many white evangelicals in the United States believe that their vision of the country as a white, Christian nation is under threat from secularism. In the face of this perceived threat, he argues, this group turned to Trump for deliverance, perceiving his strong defense of religious freedoms and appointment of numerous conservative judges as evidence that he is best placed to protect their faith.

In the lead-up to the election, Trump regularly drew upon particularly nationalist forms of Christian imagery, promoting a rise in “patriot churches.” In an interview for the Washington Post, Prof. Paul Miller argues that Trump’s mainstreaming of Christian nationalist views has helped him to capture the evangelical vote. “He’s given permission to say this stuff out loud. He’s mainstreamed them as prominent evangelical voices,” Miller says.

The Specter of Election Unrest

As Trump continues to contest the election results, Prof. Daniel Byman warns that the United States could witness post-election civil unrest. In a piece for Foreign Policy, he outlines the groups and scenarios that could foment violence and examines how clashes can be prevented. On the latter topic, he argues that Trump’s personal actions and social media platforms’ ability to control disinformation will be determining factors in whether violence breaks out. Byman calls on security agencies and ordinary individuals not to be complacent about election-related violence. He writes, “Constant vigilance is necessary from federal security agencies to citizens in general, all of whom must try to identify threats before they snowball and morph from local tragedies to national disasters.”

Like Byman, Prof. Angela Stent says Trump’s own behavior will be crucial to the transition of power from the Tump administration to Biden’s administration. In an interview with the Washington Post, Stent argues that — like his Russian counterpart, Vladimir Putin — Trump emphasizes the rule of law when personally expedient. As Trump threatens legal action over baseless claims of widespread election fraud, Stent says, “In Russia, the law bends to the will of those who are in power. And we have seen under Trump a desire to make the Justice Department his Justice Department as opposed to the Justice Department for the American people. He would prefer to have a system where the laws are applied differently depending on who is in power.”

The Role of Foreign Influence

In a Business Insider article, Associate Teaching Professor Elizabeth Grimm Arsenault says that some of the domestic groups most likely to incite violence have ties to terror organizations and states abroad, including Russia. Grimm Arsenault points to efforts on the part of the Russian Imperial Movement, designated a terrorist group by the State Department, to build an international white nationalist coalition with U.S. organizations as evidence of this foreign influence. She says, “By highlighting divisions and hatreds that already exist in societies, Russia advances its goal of undermining the liberal order while also maintaining plausible deniability of these efforts.”

Russia’s influence is reflected in uncertainty around the election in less overt ways, too. Since 2016, the question of election interference in the U.S. by outside powers, chiefly Russia, has been debated and investigated, and a recent Institute for the Study of Diplomacy (ISD) report shows how foreign actors are adapting to efforts to curb foreign influence. Prof. Kelly McFarland, Director of Programs and Research at ISD, and Alistair Somerville, ISD’s Case Studies and Publications Editor, discussed the report in a Washington Post article, which explained how journalists may be manipulated to spread misinformation through domestic media outlets. In spite of some social media companies stepping up efforts to regulate false speech on their platforms, McFarland and Somerville say disinformation will continue to be a permanent fixture in the public arena, and not just during elections.