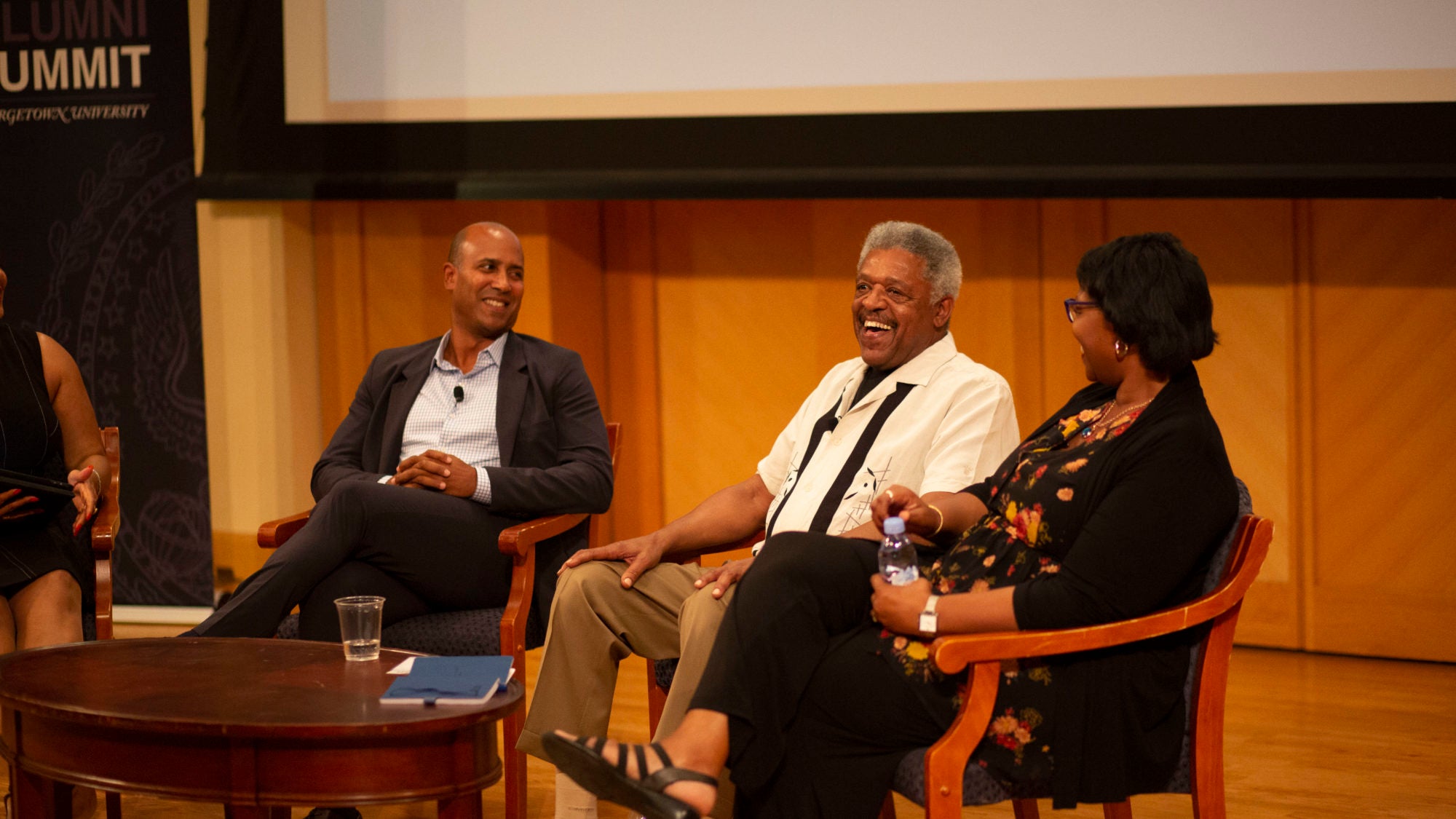 From September 26 to 29, Georgetown hosted the 2019 Black Alumni Summit, a celebration of the professional and personal achievements of its diverse and accomplished Black alumni community. The Summit brought undergraduate and graduate Black alumni from across the globe, classes, schools, eras, professions, and walks of life back to the Hilltop to reconnect with each other and with the university.

SFS alumni were well-represented at the Summit, where they helped to lead discussions on social responsibility, the role of technology, and global change.

Panel: What Does it Mean to be a Hoya?

To kick off the summit, Elizabeth Nalunga (SFS’19), the litigation manager for Georgetown’s Office of General Counsel, joined several other alumni for a dialogue on Hoya identity. While at Georgetown, Nalunga chaired the SFS Centennial Planning Committee, interned with the Congressional Black Caucus Foundation, and worked for the Georgetown Laboratory for Global Politics and Performance.

Panel: The Power of Our Dollars – Corporate Social Responsibility

Next, SFS alum Sundaa Bridgett-Jones (SFS’93), Senior Associate Director of the Rockefeller Foundation, joined a panel exploring corporate social responsibility and consumer activism. Over the course of her career, Bridgett-Jones has worked at the U.S. Department of State, the National Security Council, and the United Nations Department of Political Affairs.

Panel: Tech Talk – How Emerging Technologies Are Shaping Our World

Kim Keenan (SFS’83), co-chair of the Internet Innovation Alliance, moderated a panel on technology’s impact on the Georgetown and African American communities. Previously, Keenan served as president and CEO of Multicultural Media, Telecom, and Internet Council, as well as General Counsel and Secretary of the NAACP.

Panel: Global Threats and Opportunities to the United States

One panelist was Zaid Zaid (SFS’97), who is currently a member of the Public Policy Strategic Response team at Facebook. Zaid previously served in the Obama White House as Special Assistant to the President and Associate White House Counsel, as well as a position as senior attorney-advisor to the general counsel at USAID.

The panel also included Tony Johnson (SSP’18), a 15-year veteran of the national security field who is currently serving as the team chief of the Strategic Red Teaming Cell in the Joint Advanced Warfighting Division at the Institute for Defense Analyses.

Thank you to all of the SFS alumni who joined us for a weekend of celebration!