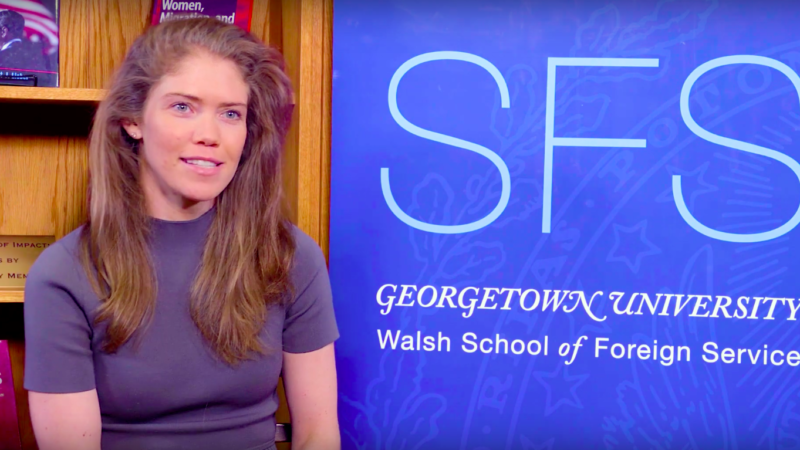 Reilly Dowd (SFS’13), Filmmaker with a Cause

Reilly Dowd (SFS’13) spent four years directing and producing Dreams of Daraa, a feature film documentary that follows a young Syrian mother and her three children from the Zaatari refugee camp in Jordan to Germany.

Reilly Dowd (SFS’13) decided to come to the SFS because she was “obsessed with politics and a total news junkie.” After graduating, Dowd began working on her documentary in Zaatari refugee camp in northern Jordan. There, she met Hanadi, a young Syrian refugee mother, and her three children. The documentary follows Hanadi’s journey from Jordan, back to Syria, and finally to Germany. “What I’m most proud of in my career is having played a role in them getting out of Syria and their opportunity to now start a new life in Germany and seek asylum.”

She previews her documentary, talks about connecting filmmaking and art to social impact, and describes what sets Georgetown apart. Read more about Reilly at http://bit.ly/2HFtyjT.

Reilly Dowd is a graduate of Georgetown University’s School of Foreign Service, where she focused her studies on investigative journalism and international politics. She has worked at SnagFilms (indieWIRE), CNN, ABC News, Al Jazeera America, The Fiscal Times as well as for former House Speaker Nancy Pelosi and the Obama White House Office of Presidential Correspondence.

Reilly has spent the last three years directing and producing her first feature documentary, DREAMS OF DARAA. In bringing this film to life, she was a fellow in the 2016 Studios Program of the Halcyon Arts Lab in Washington, D.C. At the intersection of art and social impact, this nine-month fellowship supports emerging artists with the bold ideas of how art and creativity can be forces for social change. Reilly is currently a fellow in the Fledgling Engagement Lab, a highly selective program which supports projects that are focused on issues affecting vulnerable populations that are poised for action. During the one-year lab, she will work alongside a handful of other social issue documentary film teams to design and implement a social impact campaign focused on Syrian refugee women and children.

Reilly currently lives in Los Angeles, where she is pursuing her graduate degree in the prestigious Peter Stark Producing Program at the University of Southern California’s School of Cinematic Arts.