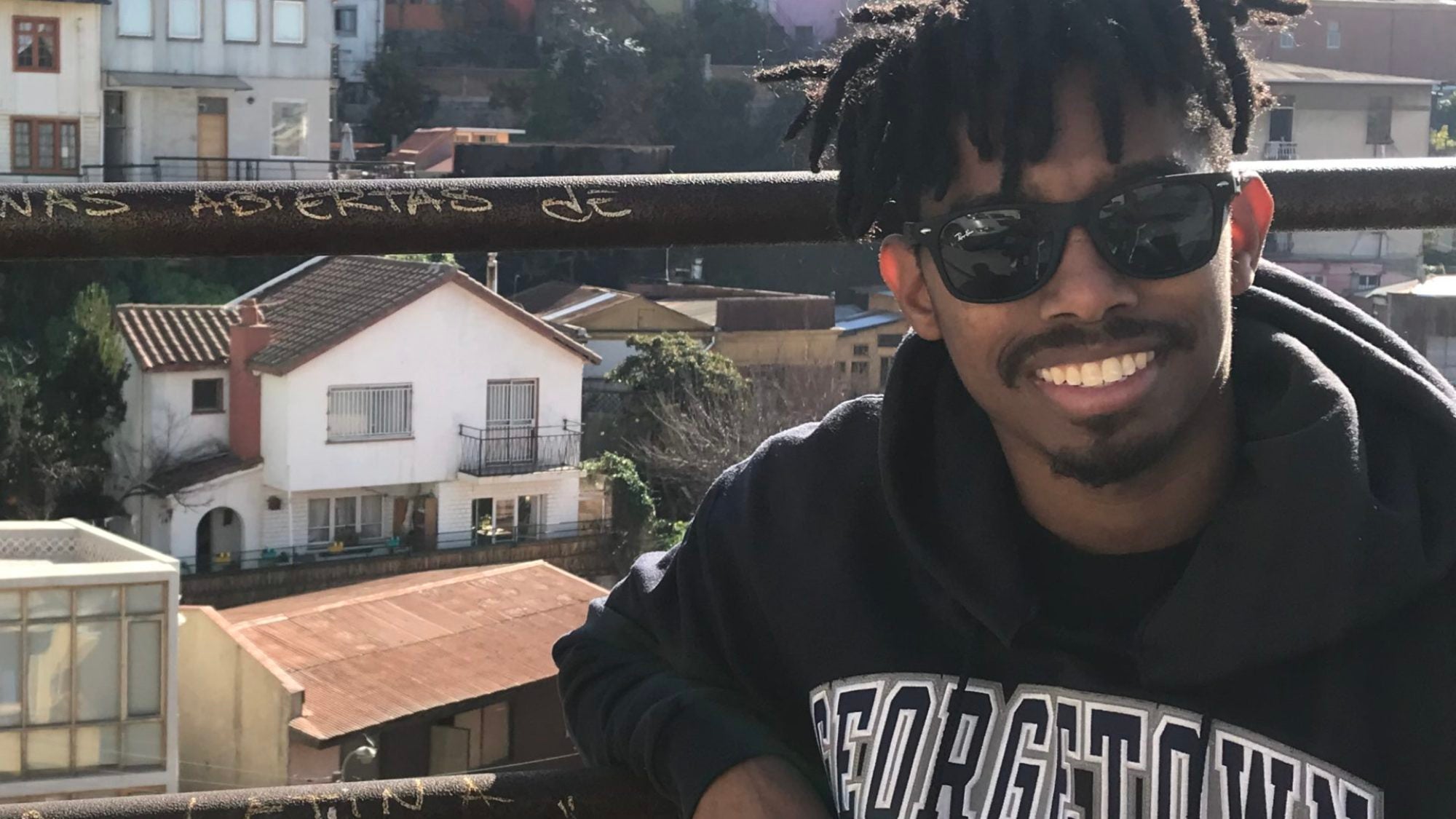 When analyzing the sweeping trends of international affairs, the individual lives and communities behind the political and economic forces that govern relations between countries are sometimes lost.

But, for the past two years of his Master of Arts in Latin American Studies degree at SFS, Marvin Wiley (LAS’20) has worked hard to center the social and cultural experiences of marginalized Latin American communities in his classwork and research.

Wiley first decided to pursue the regional studies program after living and working in Colombia for two years. It was there that he realized the importance of digging into the cultural factors that determine how communities engage with the world that they live in, and of using those insights to create policy and initiatives that create real solutions to the problems people face in their daily lives.

“By living in Colombia, I understood the way to solve many of the problems facing the country went deeper than just understanding public policy, history or economics,” he explains. “Culture is powerful.”

Now, as the Pennsylvania native graduates in the midst of a global pandemic that is threatening the lives and livelihood of vulnerable communities across the world, Wiley is determined to use his skills, knowledge and training to build a better world after COVID-19, in Latin America and beyond.

Studying at the Center for Latin American Studies (CLAS) at Georgetown enabled Wiley to gain a deeper understanding of the intersecting issues affecting the region.

“My program of study examined public policy, history and economics,” he says, “but also examined gender issues, racism and discrimination, classism, corruption, environmentalism and development in the context of Latin America and its relationship with other regions of the world.”

The program also expanded his academic interests. While he came to Latin American Studies seeking an interdisciplinary education focused on political economy, he has since added new topics and issue areas to his academic repertoire.

“I never thought much about immigration and human rights before starting the program,” he explains. “But I’ve realized those topics are fundamental in supporting and understanding the plight of marginalized groups.”

Learning from the CLAS Community

In addition to the numerous opportunities to pursue new research avenues, Wiley says his scholarship has benefited greatly from the support of his CLAS community.

“Georgetown is a warm and welcoming place,” he says.

He credits numerous faculty members with providing him with mentorship and guidance throughout his two years at the program, including Dr. Angelo Rivero Santos, who Wiley worked with in Santiago, Chile and Bogota, Colombia, and who he says is the faculty member who has had the greatest impact on his studies.

Among Wiley’s favorite Georgetown classes was Dr. Anna Deeny Morales’s Culture and Power, a course he says enabled him to more deeply explore the importance of culture as it relates to international affairs.

“The class reminded me why I wanted to study Latin America,” he says. “Her passion for the region, the people and culture was proof that what we are studying is much bigger than politics and economics. It’s about people and culture.”

Wiley’s fellow CLAS cohort also made a positive mark on his graduate school experience. “I will miss being in an intellectually stimulating environment with like minded individuals who are eager to learn about how the world works and contribute to making it a better place for all people,” he says.

“Studying alongside my classmates made me realize how similar our experiences are yet how there is so much to still learn from each other,” he adds.

Completing his degree during the COVID-19 pandemic has meant that Wiley’s final semester at Georgetown has been an extremely difficult one. The pandemic has had a deeply personal impact on Wiley; his uncle died from COVID-19 during an outbreak at his nursing home.

Wiley’s family’s loss, as well as his understanding of how the pandemic has impacted the communities he works in, has focused his attention on the deep inequalities that are exacerbating the effects of the public health crisis on marginalized people, including in the United States.

“If I’m fortunate to survive this period, I will look back and see a divided country, both politically and economically,” he says. “The majority of those suffering were poor, black and brown people, immigrants, students and the imprisoned. COVID-19 did not impact everyone equally.”

He continues, “I will think about my uncle who died of COVID-19 at his nursing home. How countless people in urban, poor communities will be still forgotten. How large corporations were able to recover their losses and how the vast majority of small businesses will no longer exist.”

He also worries that the economic impact of the pandemic will increase barriers for low-income students to experience the educational opportunities he himself has enjoyed. “Many companies will reduce starting salaries of new employees, making it harder for graduates to make their student loan payment and invest in a home,” he predicts.

“Many students will not be able to afford a Georgetown education and miss out on opportunities I had a chance to experience,” he continues.

Wiley believes that it is imperative that SFS graduates apply their Georgetown training to efforts to combat the crisis.

“Georgetown University, its graduates and staff must continue to be engaged with the world as equal partners to solve the crisis at hand and its complications in the years to come,” he stresses.

“With international travel extremely limited for the foreseeable future, Georgetown’s investments in relationships with international institutions will serve as a window into what is happening on the ground in places around the world and will help in the efforts to support our partners and their communities,” he says.

Changing the World for the Better

Wiley himself is ready to take up this challenge. “Now more than ever, people with my skills and experiences will be needed to support in understanding the social and economic effects COVID-19 is having not only in Latin America but all over the world,” he says.

“Addressing these key issues is important to helping marginalized communities overcome the sure to be lasting impacts of this disease from a public health and public policy perspective,” he continues. “I believe my cohort and Georgetown graduates at large are prepared to address these challenges.”

Currently, Wiley is working at an international think tank in D.C. In the long term, he would like to pursue his goal of becoming a U.S. Foreign Service Officer or work for a sustainable development agency.

Either way, Wiley says that he is ready to make a positive mark on the world. “Georgetown University and its Jesuit tradition was the ideal place for me to obtain the skills needed to understand the world and mindset to contribute to changing it for the better,” he says.

And, though Wiley is graduating at a time when the world faces many grave challenges, he is hopeful that in the future he will be able to think about this period as one when the international community set its sights on building a kinder and more just world.

“I hope I’ll look back on this time and think about how many of us were able to get closer to our families and friends and think about what really matters in life,” he says. “How the pandemic in 2020 forced us to have difficult conversations about the issues that were already plaguing the world, issues such as racism, classism and sexism. How empathy, cooperation and science ultimately healed the world.”