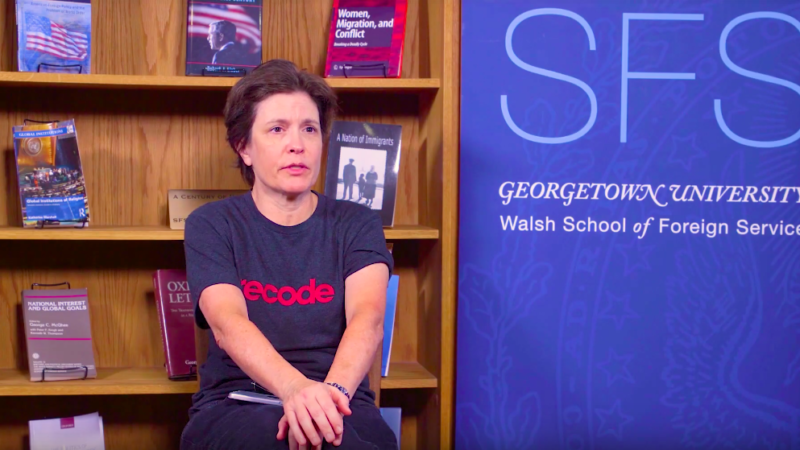 Kara Swisher (SFS’84) is the co-founder and editor-at-large of Recode, a technology news website. Swisher has also worked for The Washington Post and The Wall Street Journal, and currently has an opinion column in the New York Times.

Swisher values the well-rounded education that she received at Georgetown, which forces students to take essential courses that they might not have taken otherwise.

“Right now I work in Silicon Valley where nobody took humanities, and you can see the disaster that’s happened,” Swisher said. “They’re grappling with all kinds of ethical issues, they’re grappling with their impact and everything else, and they aren’t capable of understanding the patterns of history or politics in the way that they need to.”

Swisher recalls being blown away her first semester at Georgetown during her “Problem of God” class, when the professor said something she still remembers to this day: “Is it God’s problem with man, or man’s problem with God?”

Kara Swisher is the executive editor of Recode, host of the Recode Decode podcast and co-executive producer of the Code Conference. Recode and Code are wholly owned by Vox Media, a company with an audience of 170 million worldwide. Swisher co-founded former Recode and Code owner Revere Digital and, before that, co-produced and co-hosted The Wall Street Journal’s “D: All Things Digital,” with Mossberg. It was the major high-tech conference with interviewees such as Bill Gates, Steve Jobs and many other leading players in the tech and media industries.

She and Mossberg were also the co-executive editors of a tech and media website, AllThingsD.com. Swisher worked in The Wall Street Journal’s San Francisco bureau. For many years, she wrote the column, “BoomTown,” which appeared on the front page of the Marketplace section and also on The Wall Street Journal Online at WSJ.com. Previously, Swisher covered breaking news about the Web’s major players and Internet policy issues and also wrote feature articles on technology for the paper. She has also written a weekly column for the Personal Journal on home issues called “Home Economics.” Previously, Swisher worked as a reporter at the Washington Post and as an editor at the City Paper of Washington, DC.

Swisher is also the author of “aol.com: How Steve Case Beat Bill Gates, Nailed the Netheads and Made Millions in the War for the Web,” published by Times Business Books in July 1998. The sequel, “There Must Be a Pony in Here Somewhere: The AOL Time Warner Debacle and the Quest for a Digital Future,” was published in the fall of 2003 by Crown Business Books.