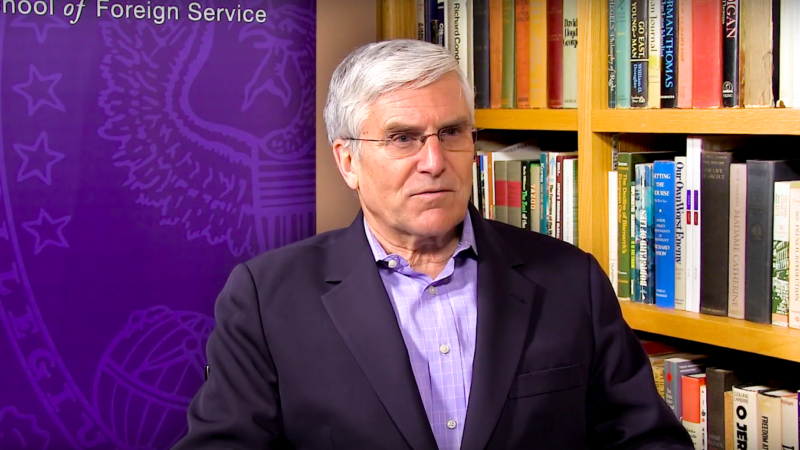 General George Casey Jr. (ret.) (SFS’70) is a four-star general who served the US Army for 41 years following his graduation from the SFS.

General Casey was an undergraduate student at Georgetown during the Vietnam War. When his father was killed in Vietnam, he felt that it was his duty to serve. His first assignment in the military was in Egypt in the middle of the Cold War on the Suez Canal. Years later, he became a Brigadier General, and went back to D.C. to work on political-military issues surrounding Europe, his “first big step onto the international stage.”

After 9/11, General Casey became the Director of Strategy and Policy for the U.S. Military, working on military strategy for the War on Terror. Looking back on his career, he is most proud of “seeing the army through a very difficult period, and coming out stronger and better prepared for the challenges of the 21st century.” 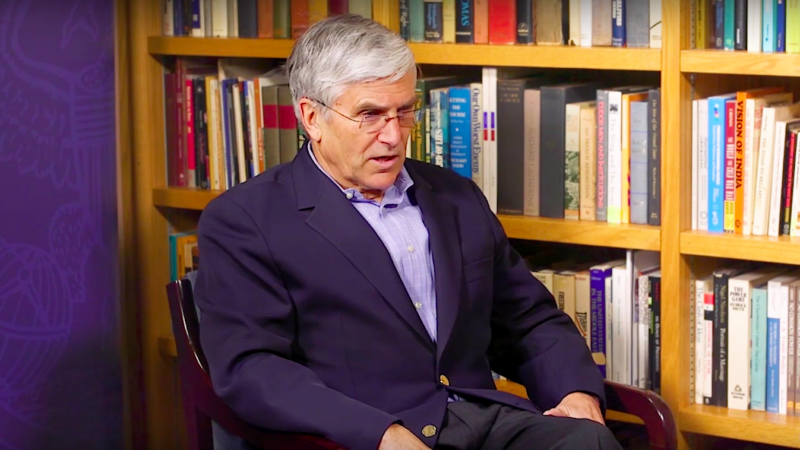 1968-1972 was “a calamitous period in American history, in higher education history, in Washington, DC and on the Georgetown University campus,” says Frank Murray (SFS’72). He, along with General George W. Casey, Jr. (SFS’70) and Roger Cochetti (SFS’72), recall what it was like to be students at Georgetown in the midst of this unrest.

Casey remembers “standing on the roof of Loyola Hall in 1968 and watching the smoke billow from downtown Washington.” The smoke was from riots that broke out across the country following Martin Luther King, Jr.’s assassination on April 4, 1968. In Washington, D.C., businesses and homes were destroyed, 13 people were killed by fires, police officers, or rioters, more than 1,000 people were injured and over 7,600 people were arrested.

Murray and Cochetti recall anti-Vietnam War protests on Georgetown’s campus, leading to a face off between civil disturbance units and student protestors from Georgetown and other schools who had camped out at the university. “The tear gas,” Murray says, “actually permeated the buildings. There was so much tear gas that they had to cancel the final exams.”

General George W. Casey, Jr., enjoyed a 41-year career in the US Army following his graduation from Georgetown University’s School of Foreign Service in 1970. He is an accomplished soldier and an authority on strategic leadership. As the Army Chief of Staff, he led one of the nation’s largest and most complex organizations during one of the most extraordinary periods in our history. He is widely credited with restoring balance to a war-weary Army and leading the transformation to keep it relevant in the 21st Century. Prior to this, from July 2004 to February 2007, he commanded the Multi-National Force – Iraq, a coalition of more than 30 countries where he guided the Iraq mission through its toughest days.

Currently, he lectures internationally on leadership to the leaders of national and multinational corporations and at other business schools. He serves on corporate boards and numerous boards of organizations that support our servicemen and women, our veterans, and their families. He also teaches international relations at the Korbel School in Denver.