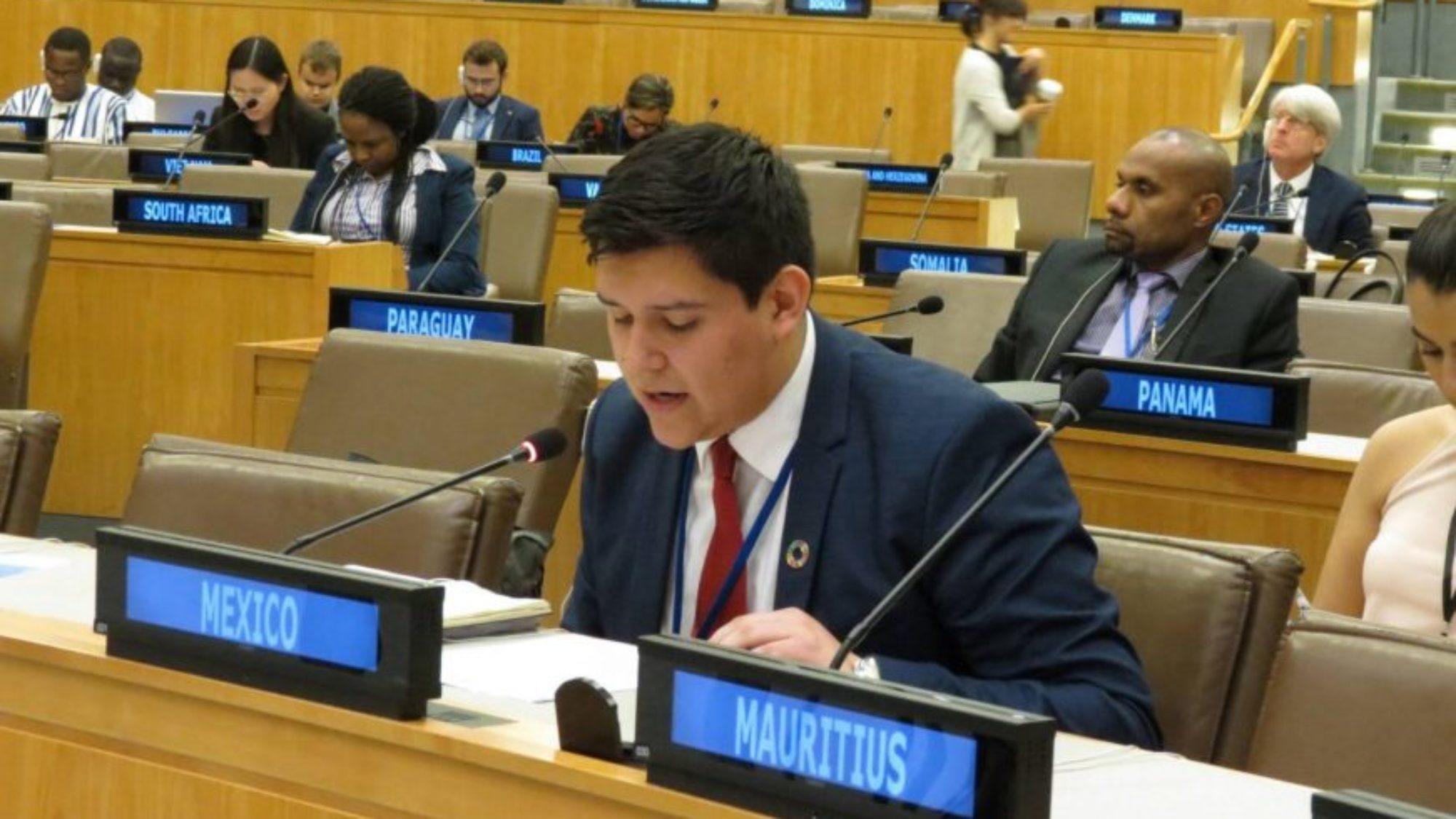 Title: For Mizraim Belman Guerrero (SFS’20), Studying Culture and Politics Has Led To A Better Understanding Of Immigration Policy And Its Dynamics

In October 2018, Georgetown junior Mizraim Belman Guerrero (SFS’20) found himself serving as a youth delegate at the United Nations Global Compact on Migration Negotiations, an experience which included giving a speech as a representative of Mexico and visiting the Security Council chambers. “The experience was one that I will never forget,” he says. He applied to be a delegate but didn’t know that he had been chosen until a reporter congratulated him. “I grew ecstatic to find out that I was one of two undocumented applicants chosen to represent my country on the international stage.”

Originally from Mexico, Guerrero grew up in Austin, Texas. He discovered Georgetown University after visiting Washington, D.C. in high school. Already interested in immigration law, Guerrero said the trip made him realize that “D.C. was the city for me to pursue my passion.” When he learned about Georgetown and the School of Foreign Service, he recognized the numerous ways the SFS could provide the opportunity to “engage further with immigration.”  Guerrero set his sights on spending his undergraduate years on the Hilltop.

Since arriving at SFS, Guerrero has taken full advantage of opportunities at Georgetown to expand his engagement with immigration issues. As a Culture and Politics major, he studies the intersection of culture, knowledge, and power, working to understand dynamics that underlie policies affecting immigrants. Guerrero was particularly interested in this major, he says, as “often times culture and politics are viewed as opposites, never integrating into one another.” He was intrigued by the prospect of applying “knowledge from each topic to the other.”

Through his coursework in the SFS, Geurrero says, “I am learning to be critical of the systems around me.” He particularly enjoyed Detouring the Global City with Professor Shiloh Krupar, whom he says “kept me constantly engaged, always feeling like I was learning.” Guerrero also highlighted Immigration and Social Justice taught by Professor Diana Guelespe, which taught him about “immigration history and how it relates to current narratives.”

Guerrero has gotten involved with a number of student groups on campus. From “engaging with immigrant rights through UndocuHoyas and Hoyas for Immigrant Rights” to “supporting workers on campus through the Georgetown Solidarity Committee and supporting students of color through Hoya Saxa Weekend,” Guerrero has been able to work collaboratively with other students who care deeply about opportunity and inclusion.

Guerrero’s experience at the UN built on his studies and activism at Georgetown, as the youth delegates were split into committees and were able to engage with all the daily activities of the mission. “I was able to put forth my own thoughts and ideas on resolutions and negotiate on behalf of Mexico,” Guerrero says. He was also able to meet ambassadors from all around the world, including Mexico’s Minister of Foreign Affairs!

Geurrero has formed relationships with a number of individuals throughout the university that have helped shape his time at Georgetown. Among them are staff at the Center for Multicultural Equity and Access and the Kalmanovitz Initiative for Labor and the Working Poor. “I have had many mentors throughout my time here at Georgetown who have made this space that traditionally hasn’t supported low-income, first-generation undocumented students more welcoming,” he says.

Looking forward, Guerrero intends to become an immigration attorney. “I want to get back and give to my roots,” he says. “The immigrant community and the immigrant rights movement helped foster my growth as a person and as a leader.” He hopes one day to be “the attorney that prevents individuals from being deported,” one that “works with activist organizations to both lobby and further support the community.”  Eventually, Guerrero wants to be an educator. “Some of the most influential people in my life have been those who supported me in academic environments, therefore inspiring me to be part of the change for other students like me.”