Chloe Schalit (SFS’20), Maggie Taaffe (SFS’21) and Julia Sabik (SFS’21) all combine a love of rowing with a dedication to learning in the School of Foreign Service. Schalit and Taaffe began rowing in their freshman year of high school and Sabik walked onto the team her sophomore year at Georgetown; all three students have competed at the highest level while at Georgetown. Sabik and Taaffe even rowed in the same boat over the course of the past season.

A Culture of Support

Schalit says of joining the rowing team, “I found an immediate family and fell in love with the feeling that rowing brings of consistently pushing myself past my limits. I haven’t been able to stop since.” 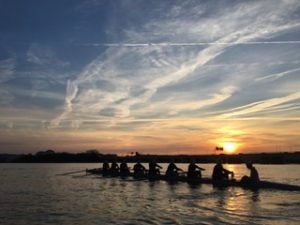 Rowing brings its own set of challenges—5:30 a.m. practices for one—but Taaffe credits the team with providing the necessary support: “When everyone acts upbeat and positive it spreads and makes the early mornings a lot easier.”

Schalit found similar camaraderie in the team, saying, “Even if we have a hard practice and my body feels like it’s on the verge of falling apart, I always know that I can turn to a teammate and she’ll make me laugh and want to continue working hard.”

Sabik agrees that the team’s payoff makes up for the demanding schedule: “Seeing our team’s hard work translate into real results, though, was rewarding and made all the work, stress and early wake-ups worth it.”

For Taaffe, the team motivates her to get better and better. This is due, in part, to the coaches as well as her teammates, including Sabik, who “has motivated others to work harder, coming in as a walk-on with fast times and a great work ethic.”

Sabik joined the team in her second year at Georgetown when she realized she “missed the dedication and hard work that varsity sports required.” She speaks highly of her teammates, mentioning Taaffe, who is “a great teammate, always willing to do what’s best for the program and support others.”

The work ethic extends to their academic pursuits as well. As International Politics majors, the three have studied various aspects of foreign relations through classes, internships and research opportunities. Sabik spent a summer interning at the U.S. Department of Commerce, and Schalit traveled to Uganda for a semester abroad last fall.

Sabik remembers being able to apply knowledge she learned in class during her internship. “Instead of debating the theoretical impact of international trade, I calculated the actual impact my specific program had on U.S. GDP. I also worked with leading business leaders from Eurasia,” she says, and “learned more about their business culture and proceedings than I could have learned from reading a book.” Part of the reason for experience such as these, Sabik says, are because of Washington D.C.’s place as the nation’s political hub, which allows for “connections in fields that I’m interested in (government, international relations).”

Schalit remembers her experience in a humanitarianism class, which taught her that humanitarian actions are not always wholly positive. The class culminated in a final project for which Schalit created a website detailing the potential negative impacts of short-term volunteer trips abroad and gave advice on better ways to create a positive impact. 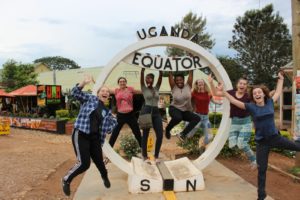 Schalit’s global engagement continued with when she studied abroad in Uganda through the School for International Training. One of the most interesting topics for her was Uganda’s refugee policy; Uganda has the third-most refugees in the world, but Schalit says, “[It] still has a fairly welcoming refugee policy that gives refugees freedom of movement, the right to education, healthcare, and work, and gives each family a plot of land to use for subsistence.”

In addition to lectures about development in Uganda, research methods and ethics and language instruction, Schalit spent six weeks on an independent field research project. Assisted by an organization called Windle Uganda, an NGO committed to providing access to resources to refugees and others affected by conflict. “I spent three of the six week research project conducting interviews with secondary school students, teachers, parents and organizations in Kiryandongo Refugee Settlement in Central Uganda,” she says. Through these interviews and other research, Schalit was able to build a clearer picture of the barriers to secondary education for Ugandan refugees.

Out of the Water

Schalit, Taaffe, and Sabik work to stay involved with world events. Taaffe says, “My favorite part about being a student here at Georgetown is how engaged the student body is. Everyone is very aware of what’s going on around them, both in the U.S. and internationally.”

Schalit is co-president of the UNICEF club at Georgetown, which undertakes initiatives such as “advocacy and fundraising campaigns that focus around an issue that UNICEF is involved with such as world hunger, forced migration, or education.”

Just as coaches provide support on the rowing team, Schalit says, “The professors at Georgetown, and especially in the SFS, are also incredible—they all have so much academic and practical experience in their fields, and I always enjoy hearing stories my professors tell about their careers in their field.” 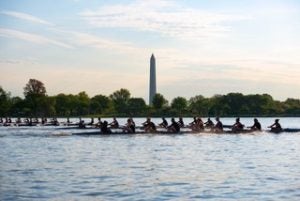 Balancing all aspects of the college experience as a student-athlete can be challenging, and all three student-athletes highlight the importance of finding a schedule that accommodates busy academics and athletics with requisite free time. Taaffe says, “Practice keeps me in a routine.”

Sabik also offers, “If I were speaking to a younger student-athlete, I would tell them to find a sustainable schedule that balances their work and practice times with free time to avoid feeling overwhelmed or overworked.”

All the practice and discipline is bound to show results during the season. Looking ahead to the Patriot Leagues, Taaffe says, “As a team, we’ve been making huge gains in speed, and I am excited to see all our hard work pay off.”