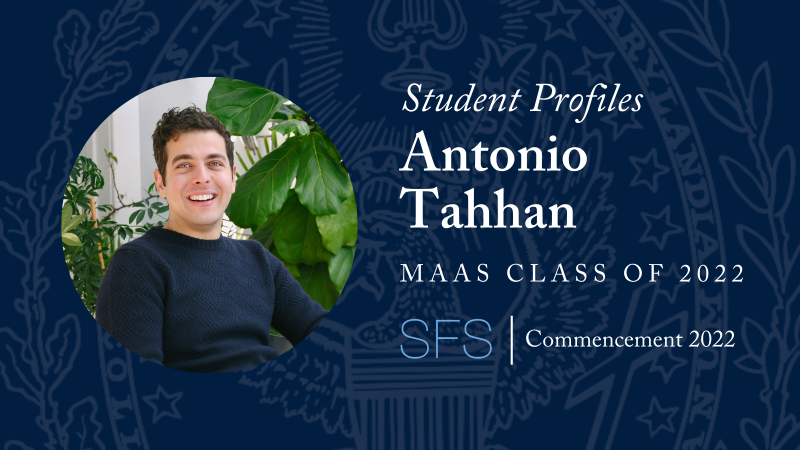 Antonio Tahhan (MAAS’22) has always had an appreciation for the cultural connections that bind global communities together. Born in Venezuela to a Syrian family from Aleppo, Tahhan grew up in Miami before moving to Washington, DC. In each of these places — which Tahhan says all “represent a bit of home” — he has connected with people, and his own cultural roots, through food.

Food was also a gateway to the community he found in the Master of Arts in Arab Studies program, from which he will graduate this month. An established culinary writer and researcher, Tahhan attended a Center for Contemporary Arab Studies symposium on Levantine cuisine at Georgetown and was motivated to apply for the center’s MAAS graduate program. Throughout his time at SFS, Tahhan has continued to explore his passion for the food cultures of the Middle East and is a contributor to the recently published volume Making Levantine Cuisine: Modern Foodways of the Eastern Mediterranean.

After graduation, Tahhan intends to produce a documentary about the food cultures of the Syrian diaspora, which he hopes will “highlight the ways Syrians are more than just vulnerable communities that we often see portrayed in the media.”