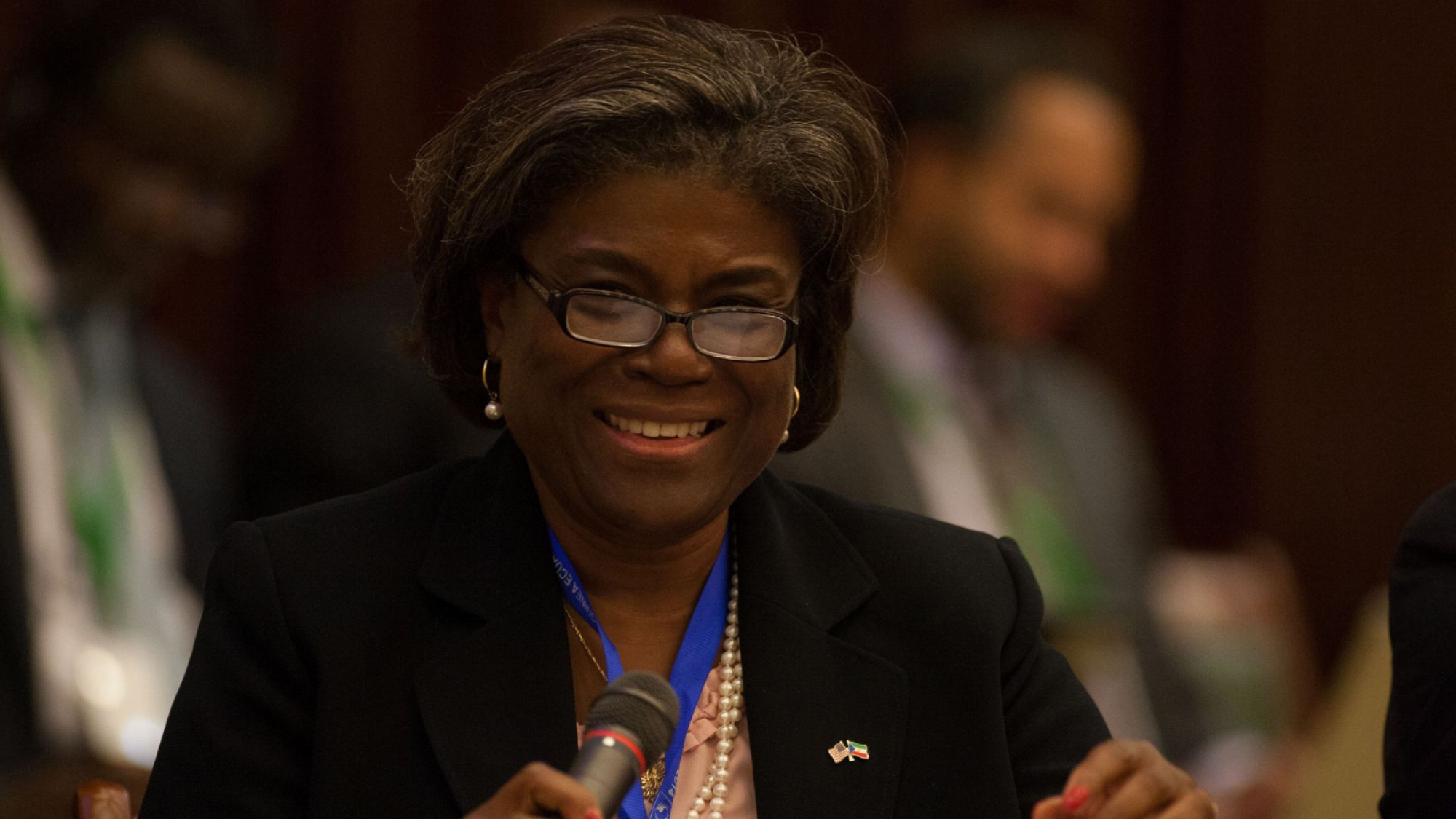 As President-elect Joe Biden prepares to take office, he is drawing on the expertise and recommendations of members of the SFS faculty and alumni community for his foreign policy approach.

On November 23, the incoming administration announced Amb. Linda Thomas-Greenfield, who currently serves as a Non-Resident Fellow at the Institute for the Study of Diplomacy (ISD), as Biden’s pick for U.S. Ambassador to the UN.

The President-elect has tapped SFS community members elsewhere, too. His agency review teams, which are tasked with building up knowledge of the work and culture of government agencies under the outgoing administration, feature 17 SFS faculty and alumni, who will share their knowledge and skills with the new administration as it prepares to take office.

He said, “Linda Thomas Greenfield, with her 35 year career breaking barriers in our own country and fostering respect for democracy and human rights around the world, is the right choice for UN Ambassador at this critical moment in the changing global order.”

ISD Director Amb. Barbara Bodine congratulated Thomas-Greenfield on her nomination saying, “[She] is an excellent choice for this position and we could not be more proud of her. She has deep experience in conflict areas and has worked on crafting sustainable agreements to bring about peace.”

Thomas-Greenfield’s nomination comes alongside the nominations and appointments of other prominent SFS faculty and alumni to the administration, including Amb. Nancy McEldowney as National Security Advisor to Vice President-elect Kamala Harris and former White House Chief of Staff Denis McDonough as President-elect Biden’s pick for Secretary of Veterans affairs. 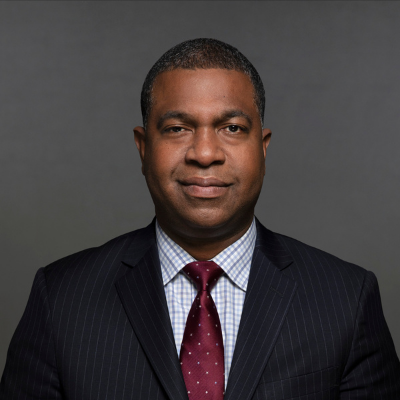 Spencer Boyer, Adjunct Professor at the BMW Center for German and European Studies and Center for Security Studies, has prior experience in the Obama administration, in which he served as Deputy Assistant Secretary of State for European and Eurasian Affairs and National Intelligence Officer for Europe. He also has international legal experience, having worked as a clerk and attorney at international courts including the International Criminal Tribunal for the former Yugoslavia at the Hague, the Claims Resolution Tribunal for Dormant Accounts in Zurich and the International Court of Arbitrations in Paris. 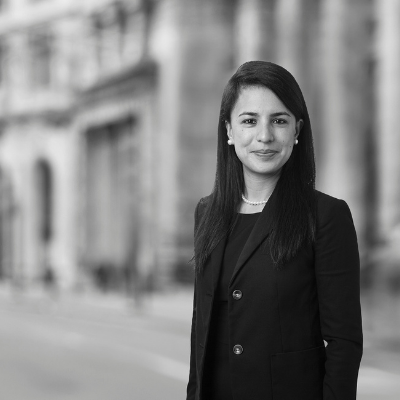 Alumna Gabriela Baca (SFS’08) is an associate in the Washington office of international law firm, White & Case, where she focuses on antitrust matters. She previously served as a political appointee in the Obama Administration at the U.S. Overseas Private Investment Corporation and at the U.S. Department of Homeland Security. She interned in the chambers of Honorable Rudolph Contreras of the U.S. District Court and was a Fulbright Fellow in Brazil. 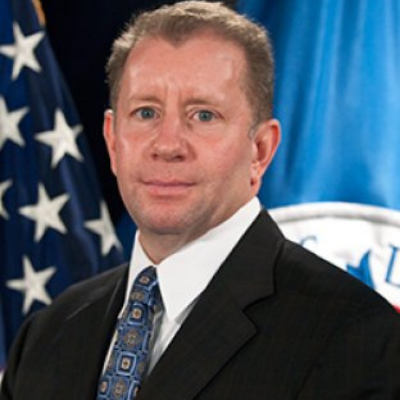 John Cohen, Adjunct Professor in the Security Studies Program, is a scholar of mass casualty attacks and internet communications. Cohen currently works as a Senior Expert on Global Threats for Argonne National Laboratory, a U.S. Department of Energy-run research center. Previously, Cohen was Director of Rutgers University’s Center for Critical Intelligence Studies and served as Acting Undersecretary for Intelligence and Analysis and Counterterrorism Coordinator in the Department of Homeland Security. 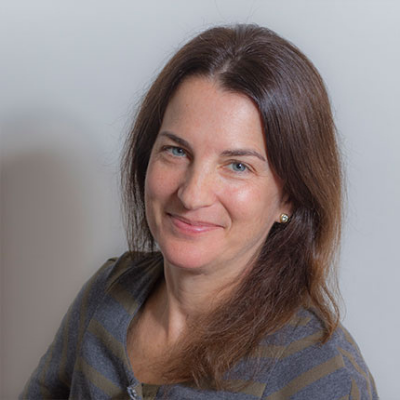 Bathsheba Crocker, a former SFS Centennial Fellow, is an expert in foreign affairs and government. Crocker has held posts at the State Department and on the National Security Council in the past, including as Assistant Secretary for International Organization Affairs. As current Vice President for Humanitarian Policy and Practice at CARE, Crocker leads CARE USA’s humanitarian relief efforts and policies and supports other country offices with aid programs. 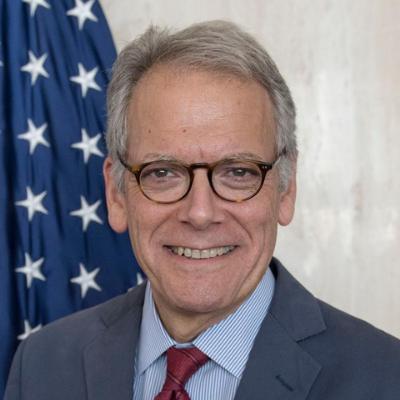 Amb. Jeffrey DeLaurentis, ISD Distinguished Resident Fellow in Latin American Studies, had a long career in the U.S. Foreign Service before returning to SFS. He was the first Chargé d’Affaires at the U.S. Embassy in Havana following the re-establishment of diplomatic relations between the United States and Cuba. Other notable positions during his State Department career were as Ambassador/Alternate Representative for Special Political Affairs at the U.S. Mission to the United Nations and as Deputy Assistant Secretary of State for the Bureau of Western Hemisphere Affairs. 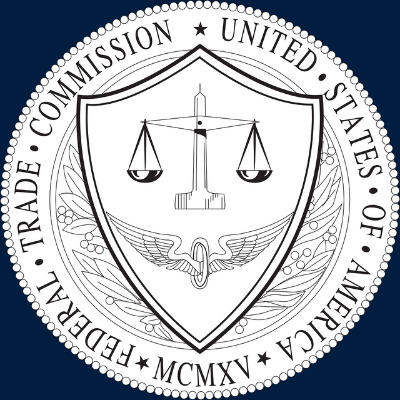 Earlier this year, alumna Heather Hippsley (SFS’79) retired from her position as Federal Trade Commission Deputy General Counsel, having spent more than 35 years at the agency. Previously, she served as an Assistant Director in the Divisions of Advertising Practices, Enforcement and Service Industry Practices, and as an Attorney Advisor to Commissioners Andrew J. Strenio, Jr. and Dennis A. Yao. She joined the agency in 1984 as an attorney in its Cleveland Regional Office. 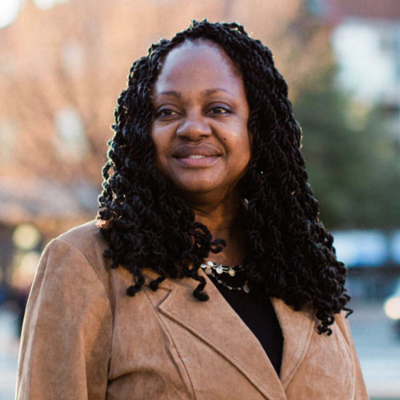 Adjunct Professor Amb. Bonnie Jenkins is the Founder and Executive Director of the Women of Color Advancing Peace, Security and Conflict Transformation (WCAPS), an organization that advances the leadership of women of color in international affairs. She has extensive experience in the State Department and previously served as coordinator for threat reduction programs in the Bureau of International Security and Nonproliferation and helped to establish the Global Health Security Agenda (GHSA), a global effort to build capacities to prevent infectious disease. 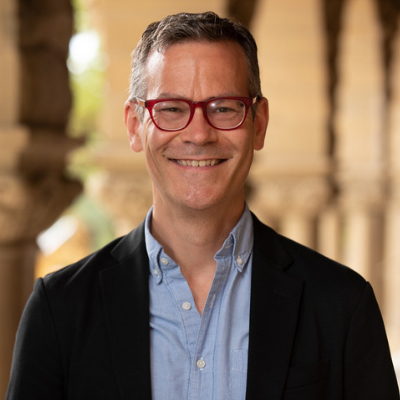 Colin Kahl is a former SFS associate professor who spent a decade teaching in the Security Studies Program from 2007. He is currently Co-Director of the Center for International Security and Cooperation at Stanford University. He is also a Strategic Consultant to the Penn Biden Center for Diplomacy and Global Engagement. He previously served as Deputy Assistant to President Obama and National Security Advisor to the Vice President Biden and as the Deputy Assistant Secretary of Defense for the Middle East at the Pentagon. He has held academic positions at the University of Minnesota and Harvard University. 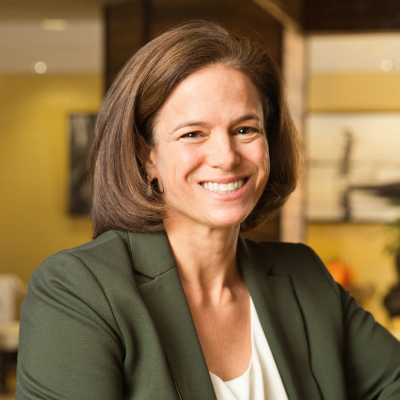 Science, Technology and International Affairs Professor Rebecca Katz is Director of the Georgetown University Medical Center’s Center for Global Health Science and Security. An expert on the World Health Organization and international health regulations, her research focuses on domestic and global management of public health emergencies. Prior to coming to Georgetown, Katz spent ten years as a faculty member in the Milken Institute of Public Health at George Washington University. She previously served as a consultant to the U.S. Department of State, working on issues related to the Biological Weapons Convention, pandemic influenza and disease surveillance. 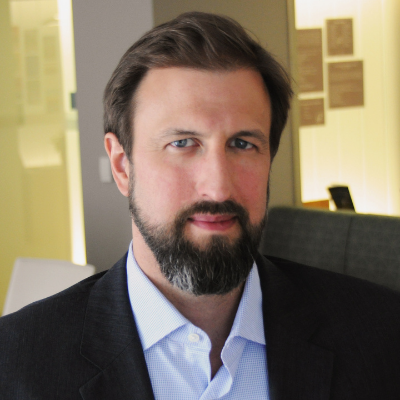 Jeremy Konyndyk (MSFS’03), Adjunct Instructor for the Global Human Development Program, is an expert in pandemic and outbreak response. Konyndyk was one of the first policy-makers to warn that the initial COVID-19 outbreak in Wuhan would continue to spread. He is a Senior Policy Fellow at the Center for Global Development, where he focuses on humanitarian response, USAID policy reform and global outbreak preparedness. Previously he served as Director of USAID’s Office of US Foreign Disaster Assistance, where he led the U.S. government’s response to the Ebola outbreak in West Africa. 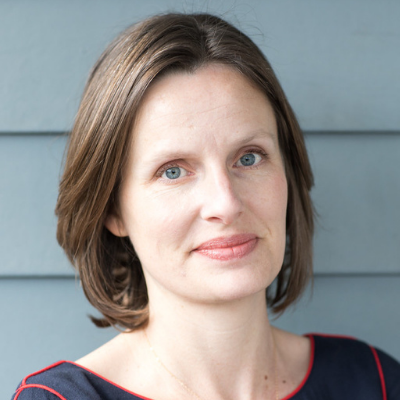 Ellison Laskowski (MAGES’03) is a Senior Fellow in the Asia Program at The German Marshall Fund of the United States (GMF). A former foreign service officer, she served as special assistant to the Undersecretary of State for Political Affairs and as senior advisor to the Special Representative for North Korea. Prior to her State Department career, Laskowski worked on the Europe team at the Department of Justice, Office of International Affairs, Criminal Division. 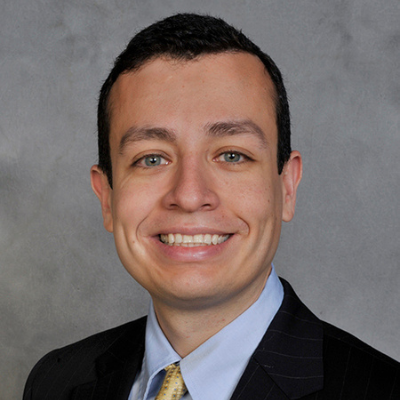 Alumnus Michael Negron (SFS’01) has devoted much of his career to public service in the state of Illinois. Currently Assistant Director of the Department of Commerce and Economic Opportunity, Negron spent a number of years working as a policy advisor to Chicago Mayor Rahm Emanuel, specializing in education and economic opportunity issues in the city. After graduating from SFS, Negron served as an officer in the U.S. Navy and worked in both the White House and on Capitol Hill. 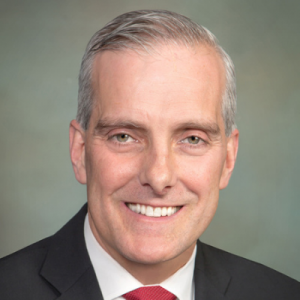 Alumnus Denis McDonough (MSFS’96) previously served as the 26th White House Chief of Staff during President Barack Obama’s second term. After graduating from MSFS, McDonough worked in the U.S. House of Representatives and Senate on foreign affairs and international relations committees. He later joined President Obama’s team as senior foreign policy advisor and served on the National Security Council. He is currently a senior advisor at the Markle Foundation. 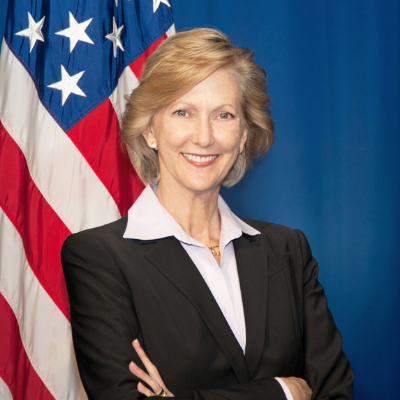 ISD Non-Resident Fellow Amb. Nancy McEldowney previously served as Director of the Master of Science in Foreign Service (MSFS) program. Prior to coming to Georgetown, she was Director of the Foreign Service Institute as well as Interim President of the National Defense University. Before her educational leadership, McEldowney served in a number of overseas posts as a career Foreign Service Officer, including as Ambassador to the Republic of Bulgaria and Chargé d’Affaires and Deputy Chief of Mission in Turkey and Azerbaijan. She also worked under President Clinton as Director of European Affairs on the National Security Council staff. ISD Director Amb. Barbara Bodine congratulated her colleague on the appointment, saying, “Ambassador McEldowney is a superb choice as National Security Advisor to the Vice President. Her broad diplomatic expertise and commitment to global public service make her ideally suited to provide Vice President-elect Harris objective, innovative, and coherent advice on our engagement and relations abroad.” 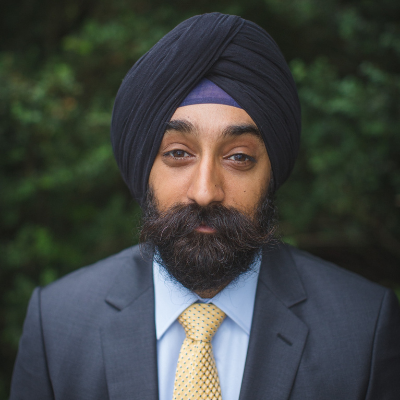 Alumnus Pavneet Singh (MSFS’09) is a nonresident fellow in the John L. Thornton China Center at the Brookings Institution, where he examines how machine learning and advanced analytics can solve complex international data challenges. Since graduating from MSFS, he has held several roles on the National Security Council and National Economic Council. Singh also served as senior advisor to Deputy National Security Advisor Mike Froman and as an analyst at the World Bank’s Commission on Growth and Development. 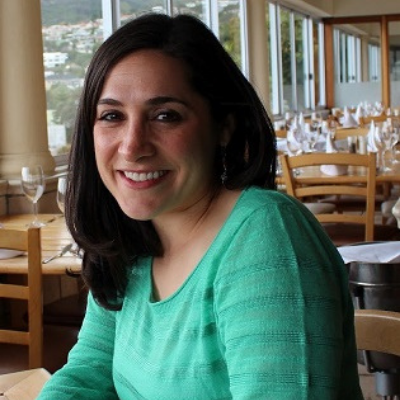 Alumna Dana Stroul (MSFS’08) is the Shelly and Michael Kassen Fellow in The Washington Institute’s Beth and David Geduld Program on Arab Politics. An expert in Middle East politics and security, Stroul previously served as a senior professional staff member on the Senate Foreign Relations Committee, where she covered the Middle East, North Africa and Turkey, and in the Middle East policy office of the Secretary of Defense. She has also applied her expertise to positions in the U.S. Embassy in Cairo, the U.S. Institute of Peace and the National Democratic Institute on Gulf Affairs. 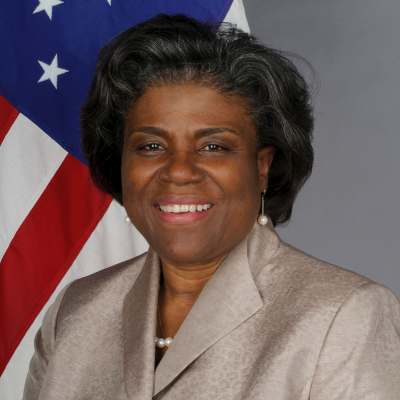 Amb. Linda Thomas-Greenfield, Non-Resident Fellow at the Institute for the Study of Diplomacy (ISD), is Biden’s nominee for U.S. Ambassador to the United Nations. Thomas-Greenfield is also leading the President-elect’s Department of State review team. A veteran of the State Department, she will bring a wealth of experience in diplomacy to her new role, having previously served as Ambassador to Liberia; Assistant Secretary for the Bureau of African Affairs; Deputy Assistant Secretary of the Bureau of Population, Refugees and Migration; Director General of Foreign Service and as Director of Human Resources in the agency. She has also served in postings to Switzerland, Pakistan, Kenya, The Gambia, Nigeria and Jamaica. She currently leads the Africa Practice at Albright Stonebridge Group. 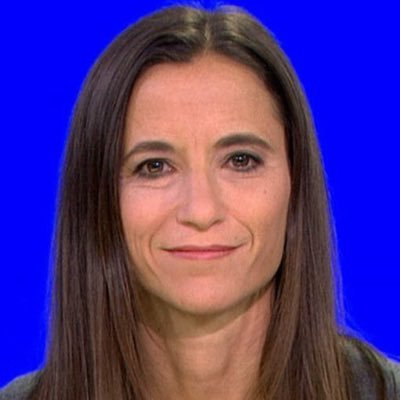 Alumna Paula Garcia Tufro (MSFS’06) is currently a Project Director at the United States Institute for Peace. In her career since graduating from the MSFS program, she has served as Deputy Director of the Adrienne Arsht Latin America Center of the Atlantic Council and as Director for Development and Democracy at the National Security Council, where she advised the Obama administration on global development policy and programs. She has also served in leadership roles at the Overseas Private Investment Corporation (OPIC) and the Department of Commerce.